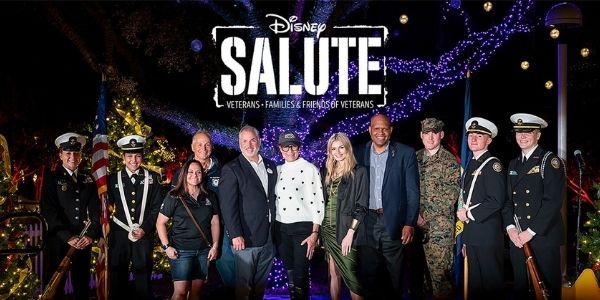 With November being National Veterans & Military Families Month, the Walt Disney Company has been honoring veterans in many ways, most notably parenting with Give Kids The World for a magical Night of a Million Lights.

Night of a Million Lights is an event lasting from November 12, 2021, to January 2, 2022, at Give Kids the World Village. With Give Kids The World receiving some of the three million dollar grant recently issued by Disney within the community, as well as millions of lights from the Mouse himself, the organization was able to create a whimsical and incredibly magical of festive decoration. Thanks to millions of holiday lights donated by the Walt Disney Company, Give Kids The World was able to completely transform the village into a festive fairy tale wonderland.

The first Night Of A Million Lights was held last year and was an amazing success, and the tradition continues on this year. Give Kids The World Village is an integral partner in Disney’s Wish Granting efforts with Wish families able to laugh, play and create priceless memories together away from hospital visits and medical procedures at Give Kids The World Village, helping children build the physical and emotional strength needed for them to fight critical illnesses.

The Walt Disney Company has always been supportive of veterans. both within the company and those who visit all of the parks and resorts. This year, in partnership with the Disney SALUTE program, a Disney Business Employee Resource Group for those who have served, Give Kids The World hosted over 2,000 veterans for a very special preview night of this wonderful event. Cappy Surette, a retired U.S. Navy Captain and co-chair of the Disney SALUTE program had this to say:

“The spirit of service to both our nation and our community was on full display as our cast members who served in uniform enjoyed the beautiful holiday displays with their families alongside those who give so much back to communities,”

There are so many holiday events, photo opportunities, festive food and limited-time merchandise available at Walt Disney World right now, and with the 50th anniversary being celebrated, there has never been a better time to visit Walt Disney World.

Night of a Million Lights is described as:

Night of a Million Lights will transform Give Kids The World’s whimsical storybook Village into a dazzling winter wonderland. Guests can immerse themselves in an exquisitely decorated fairytale neighborhood, featuring a 360-degree dancing lights show; explore a sparkling tree trail; view larger-than-life holiday displays; take photos at one-of-a-kind step-in frames and backdrops; visit a holiday marketplace, featuring visits by Santa; and enjoy a guided storytelling tour of 100 magnificently lit villas from the comfort of a tram, included in the price of the ticket.

A variety of unique premium experiences ranging from dessert parties and behind-the-scenes tours to private balcony moments are also available for purchase.

How are you celebrating the holidays this year? Let us know in the comments below!

Comments Off on Special Disney Guests Honored With Exclusive Event