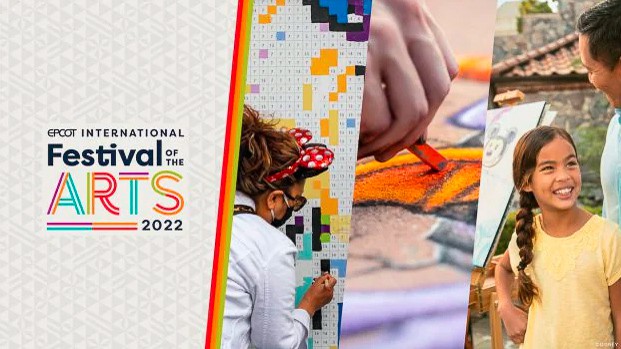 Walt Disney World announced the lineup for the 2022 EPCOT International Festival of the Arts, which is slated to kick off in early 2022.

The popular event will run from January 14 through February 21.

Deco Delights will feature desserts inspired by Art Deco, while The Craftsman’s Courtyard will feature seafood and salads. Art Deco is a popular design style of the 1920s and ’30s characterized especially by sleek geometric or stylized forms and by the use of man-made materials.

Disney Parks’ blog describes the food aspect of the event like this:

Speaking of dining, Guests will discover a delicious variety of art-inspired menus at 15 Food Studios throughout World Showcase. Deco Delights and The Craftman’s Courtyard will debut at the festival, featuring artfully presented cuisine and beverages as visually appealing as they are delicious. Keep an eye on the Disney Parks Blog for a complete foodie guide in early 2022!

Guests can also join the Wonderful Walk of Colorful Cuisine – a fun food stroll highlighting five sweet and savory offerings listed in the Festival Passport. Once Guests have purchased and received a stamp for all five items, they’ll earn a delectable Artist Palette Cookie.

Of course, visual arts are also a major part of the event. Here’s what Disney says about the opportunities to enjoy art this year:

Visual art comes to life in a variety of ways at the festival, too. More than 100 Disney and visiting artists will showcase their works throughout EPCOT. Guests can spot artists at work from the Disney Artist Gallery and the WonderGround Gallery, accompanied by pieces from ACME Archives, Thomas Kinkade Studios, Wyland Galleries, and POP Gallery.

Guests of all ages can watch imaginative chalk artists create masterpieces at Chalk Art Galleries, or improve their own artistic skills by learning how to draw a Disney Character at Animation Academy. Children can create their own chalk masterpieces at Kid’s Chalk Art and families can leave their artistic stamp on a larger-than-life mural at Expression Section: A Paint by Numbers Mural. Around World Showcase, guests can step into renowned paintings from centuries past in stunning Artful Photo Ops.

In addition, the popular DISNEY ON BROADWAY Concert Series is set to return.

Will you be enjoying the 2022 EPCOT International Festival of the Arts?