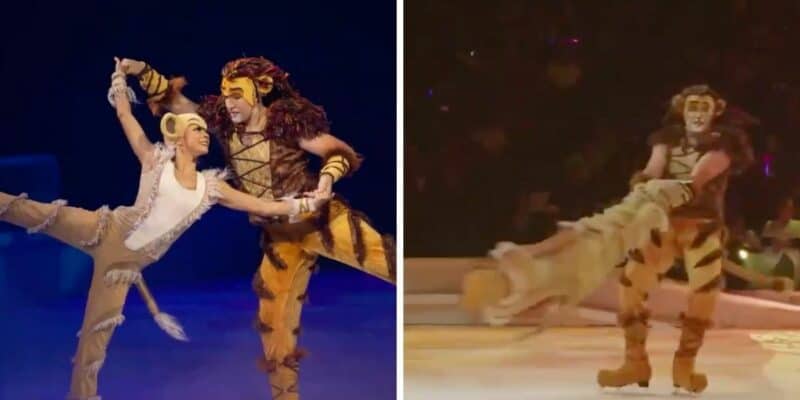 A video is now resurfacing showing a Disney on Ice actor getting knocked out after performing an extreme stunt. The reasoning this older video is going viral is because fans are asking for this stunt to be removed from the current shows as it is extremely dangerous.

Related: “The Grabber” With Disney On Ice Goes Viral

For starters, if you are not familiar, Disney on Ice is a touring ice show produced by Feld Entertainment under agreement with the Walt Disney Company. The shows feature Disney characters such as Mickey, Minnie, Donald, Goofy, Pluto and others as they tell the stories of certain animated movies. Depending on the tour, you can see Disney Princess, storybook stories, or Disney-Pixar stories!

The video that is now resurfacing shows a stunt from a 2017 showing of Disney on Ice in which the actress who plays Nala was knocked unconscious after performing a stunt with Simba actor during The Lion King portion of the show. Simba was seen twirling Nala by her feet when suddenly he takes a fall, dropping Nala on the ice. Simba get back up immediately and goes to Nala, who is seen lying on the ice, not moving.

He tries to pick her up, where her body is seen limp, and attempts to help her ff the ice.

Unfortunately, after doing some research, we are unsure if the performer is okay. Again, this incident happened in 2017 and the reasoning for the video resurfacing is simply because fans are asking for Disney on Ice to remove this stunt from the show as it is extremely dangerous.

The original user who posted the video wrote:

posting this again hoping someone will do something about this …. they should not be allowed to do this move anymore

You can view the TikTok video here:

posting this again hoping someone will do something about this …. they should not be allowed to do this move anymore #disneyonice2021 #injured

Disney on Ice is a touring ice show produced by Feld Entertainment under agreement with the Walt Disney Company.

Do you want to see this stunt removed from Disney on Ice? Let us know in the comments below.