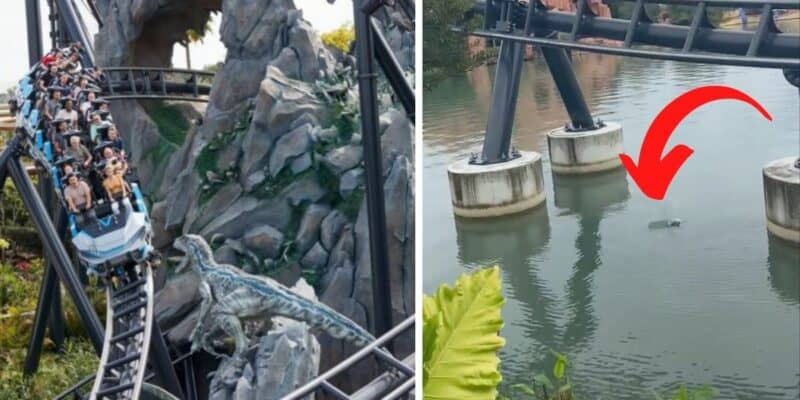 Have you ever been on a coaster that was so wild, you lost an item of clothing?

Typically, when any Guest rides a coaster at Universal Orlando Resort, they are asked to put their bags in a locker. For some coasters, fanny packs and cell phones are not even allowed, so much so that Guests must go through a metal detector to ride. Rip Ride Rockit at Universal Studios Florida is this way, as is Jurassic World VelociCoaster at Islands of Adventure.

VelociCoaster is arguably the most intense and insane thrill coaster at Universal Orlando Resort, flipping Guests while causing them to literally fly out of their seats. Due to the wildness of the attraction, it is not surprising that no objects are allowed to be taken on with you. In the past, we have even seen a Guest’s wig fly off while she was going over the top hat of the attraction, which just goes to show that everything you are wearing better be secure.

Considering one portion of the attraction flips you over water as well, losing something in the lagoon will mean that it is likely gone forever. That being said, there are times when you can lose something, and it was not a loose object in the first place! Sarah Paglione (@SarahPaglione) recently took to Twitter to post a video of VelociCoaster zooming over the lagoon. Then all of a sudden, we can see an item plop into the water! After taking a second look at the video, it is clear that it was a Guest’s shoe that was pulled off of their foot due to the intensity of the coaster’s force.

As we mentioned, because the flip flop fell into the water, it seems unlikely that a Team Member will be able to fish it out. That being said, we recently saw a Disney Cast Member jump into the water to save an oar, so you never know what may happen! Luckily, if this ever happens to you, Universal sells footwear at many locations, so you do not have to worry about being barefoot.

Whenever a Guest wears flip-flops on VelociCoaster, I recommend clenching your feet or holding them together to ensure that nothing falls off.

Have you ever lost something on a coaster at Universal Orlando Resort? Let us know in the comments below!

Want to visit Universal? You can book a vacation today! Enjoy CityWalk, Volcano Bay, as well as Universal Studios Florida, and Islands of Adventure when you visit, and in the future, Epic Universe as well.