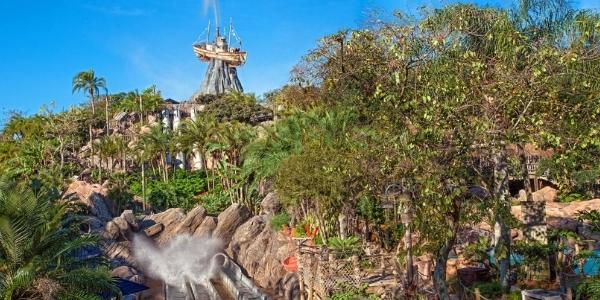 Disney’s Typhoon Lagoon water park is a fantastically-themed place to get your feet wet, featuring all your water park necessities like slides, family raft rides, and a wave pool that will send you and your Mickey ears surfing six feet high. However, due to the ongoing COVID-19 pandemic, Guests haven’t been able to visit the park, leaving it deserted since Spring of 2020.

While it is still unconfirmed when Disney’s Typhoon Lagoon will officially open, Disney has been hinting at a soon-ish date. While the extended closure is sad for all water park lovers, taking a look back into the park’s history can be a fun distraction.

Back when it opened in 1989, Disney’s Typhoon Lagoon was the second water park created by Disney, following Disney’s River Country which closed in 2001. Looking back into the development of the park really shows how dedicated to theme-filled fun Disney truly is.

“When we started work on Typhoon Lagoon, we went on research trips to water parks all around the country… I loved that job!”

According to Runco, the Park’s name was created first, with all the other parts to follow.

The centerpiece of the water park is the giant, cartoon-like shrimping boat called, “Miss Tilly” stacked on top of “Mount Mayday”, which shoots a 50-foot geyser of water out 30 minutes. Chris stated that his very first drawing included this boat-on-top-of-a-mountain idea and everyone loved it, with then-Disney Parks Executive Producer Randy Bright saying “This is it!” after just one look.

The theme of Disney’s Typhoon lagoon was very important to the designers and is arguably one of Disney Imagineering’s finest works.

Thanks to a strong storm and the titular ‘typhoon’ we see what used to be a pristine paradise has now become an overgrown and messy island, reclaimed by mother nature. Diving gear, stray surfboards and all sorts of fishing equipment have been strewn out, creating a chaotically-beautiful aesthetic.

While its closure can be linked to COVID-19, Disney has actually taken this opportunity to repair, build and refurbish multiple aspects of the park.

For those seeking water-filled fun at Disney World, Guests can still visit Disney’s Blizzard Beach water park for thrills, chills and a trip down Summit Plummit, the third-tallest and fastest free-fall slide in the world.

Are you excited for Disney’s Typhoon Lagoon water park to return? How did you ‘beat the heat’ last summer during its closure? Let us know!