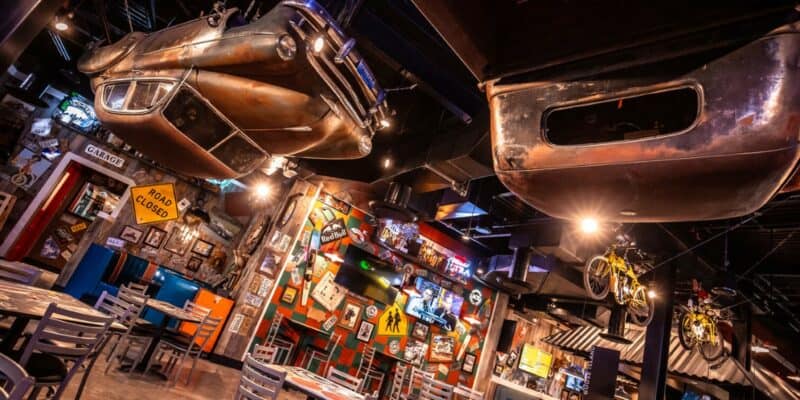 Why would anyone want to leave Walt Disney World for food when the Disney Resort property has literally hundreds of excellent dining options? THIS. This is why! A new drool-worthy burger and beer chain is officially open just minutes from Mickey’s doorstep.

RELATED: New Restaurant to Open Near Disney With 50 Burgers & 50 Brews

An award-winning midwest burger chain called Sickies Garage Burgers & Brews has moved into the Orlando area and is stirring up all sorts of excitement along the way. The restaurant boasts 50 burgers and 50 beer selections which means we’ll never get tired of eating here!

In a former Shoney’s restaurant location, Sickies Orlando has officially opened its doors with a grand opening on Wednesday, November 17, 2021. The best part for Disney fans is the restaurant is a 5 minute trip from the Disney property line.

RELATED: Two Restaurants Near Disney World Shut Down Due to Health Violations

According to the Sickies website, the burger chain is a North Dakota grown, award-winning restaurant established in 2012 as a casual, garage-themed restaurant. The restaurant chain boasts a variety of freshly made extreme burger creations and craft beer pairings. Sickies Garage offers 7 locations across North Dakota, South Dakota, Nebraska, Nevada, and Minnesota, with its newest and first southern restaurant now open next to Disney World!

The menu is loaded with all sorts of favorites that have our stomachs rumbling. Chicken wings with several sauce selections, burgers (HELLO glazed doughnut burger!), chicken sandwiches, “slick” sandwiches, fish and shrimp, salads, and all your favorite sides like fried picked and onion rings… plus, did we mention there are adult spiked milkshakes? So seriously, leave the diets at home and expect nothing but goodness.

RELATED: Thinking of Moving Near Disney World? Here is What You Need to Know

Is a meal at Sickies worth the Uber drive from Disney? We think so, but let us know your thoughts about the new restaurant in the comments!