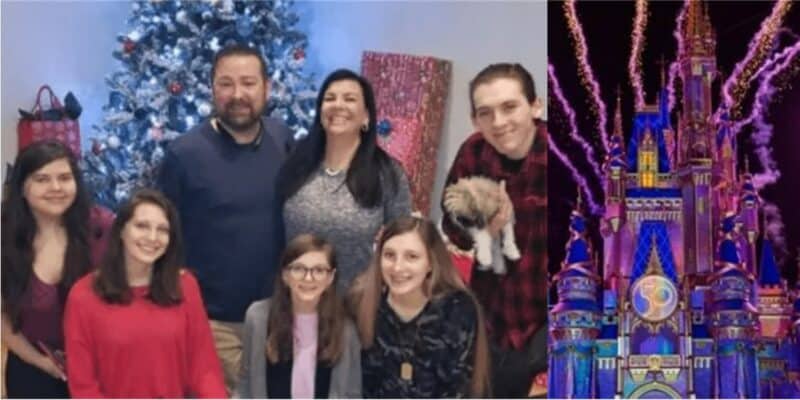 As Walt Disney World Resort celebrates 50 years of magic-making, families are flocking to the Disney Park to enjoy the special celebrations. Sadly, a family vacation to Walt Disney World ended tragically for a North Carolina family before they even reached Orlando.

According to reports, Brian and Heather Long were driving four children (3 daughters and a close family friend) to Walt Disney World Resort on Thursday, October 14, 2021, around 4:00 am. The father, Brian, had a seizure while driving and lost control of the vehicle.

The North Carolina family set out for their trip to Walt Disney World along Interstate 95 as they traveled to Florida. While in Georiga, Brian’s wife Heather, says she woke to the sounds of Brooke (the close family friend) yelling for help. Brian was experiencing a grand mal seizure. His foot was engaged with the gas pedal during the seizure which led the SUV to speed up to between 90 and 120 miles per hour.

“[Brooke] was trying to get to the brakes,” Heather said. “I threw off my seatbelt and was reaching over Brian to get the steering wheel. I was trying to keep us on the road and not hit anyone else. He jerked one good time and put his foot on the gas pedal and smashed it to the floor while having the seizure. That’s when I knew we were not going to be able to avoid an accident. I thought we were all going to die.”

The vehicle went airborne, flipping three times. Heather was ejected from the vehicle as she had removed her seat belt to help Brian and attempt to gain control of the steering wheel.

The three daughters (Natalie, Nicole, and Charlee) sustained injuries but are doing fine. The family friend (Brooke Naghdi) suffered from a fractured back. The mother, Heather, was in critical condition in an Intensive Care Unit in Savannah, Georiga with serious injuries but was recently released. The father, Brian, was pronounced dead at the scene.

A GoFundMe page listed as “Help for Heather Freeman Long and kids” has been organized with the description as follows:

“In the early morning of 10-14-21, on their way to Disney, Heather Freeman Long, Brian Long, their 3 daughters, and a close family friend had a horrible accident. The daughters sustained various injuries and should be fine with time. A family friend (who is more like a daughter) is suffering from a fractured back and hopefully will begin to feel better soon. Heather is in critical condition in ICU with serious injuries including many broken ribs. This accident took the life of Brian who was an amazing daddy, friend, husband, son, and uncle. We have all lost a great man. I cannot imagine the extent of financial needs Heather will have for medical expenses and continuing to raise their daughters. Please help if you can-no amount is too small. Thank you all!”

The GoFundMe page goal was set at $15,000. The current amount raised is $16,675 as family, friends, and anonymous donors come together to support the family.

According to Heather’s Facebook page, services for Brian Long will be held this weekend in North Carolina.

Our thoughts are with the Long Family through this tragic incident.