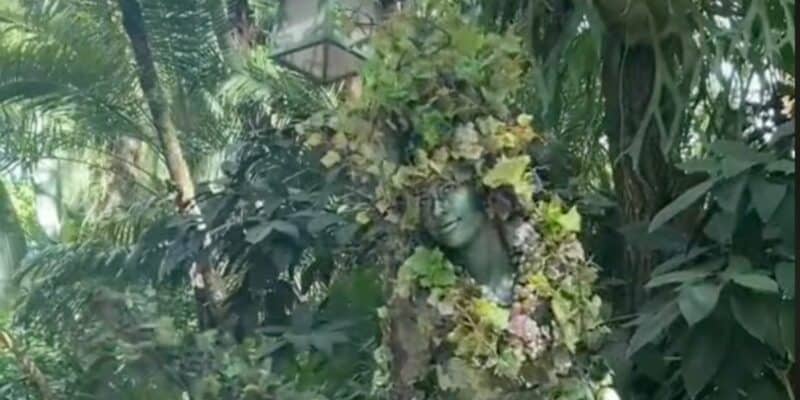 One of our favorite “Disney Princesses” is back! DiVine, the magical, ethereal lady of the jungle is finally back at Disney’s Animal Kingdom Park, prowling and posing on the path. It really feels like a big milestone as Walt Disney World Resort works to return to normal.

Fan-Favorite DiVine is BACK!

If you’ve not met DiVine yet, it may be because you’ve passed her and not realized it! DiVine is a walking character in Disney’s Animal Kingdom Park that is heavily dressed in vines and plants in order to be camouflaged. She walks on four stilts to enhance her vine appearance, too, which makes her over 7 feet tall with her stilts on the ground. If she raises them, she can easily raise up to 15 feet!

She often poses alongside the greenery at the theme park and stays still for a long time, in order to camouflage herself. As Guests pass by, she will alter her pose or move to another section of lush greenery and startle the Guests, but not in a scary way. It’s just that DiVine is never expected, and oftentimes she is not seen until you’re upon her! In the photo below, you can barely see DiVine wrapped around a light pole, waiting for Guests. DiVine’s position is naturally socially distanced, so she’s a great return addition to the Disney World theme parks.

Where Can I See DiVine?

Where can you find DiVine? DiVine can usually be found between the hours of 10 a.m. and 2 p.m., either around the Animal Kingdom Park entrance (Oasis) or alongside the back path that leads from Pandora to Africa. Many people will meander from Festival of the Lion King towards Pandora, looking at the river and enjoying the greenery… and suddenly DiVine will move and glance.

Oftentimes in the Spring, you will see Di Vine covered in flowers to celebrate the May Day ahead. You are welcome to take a photo or a selfie with DiVine, but remember to keep moving and let others be surprised!

TikTok user, Brenda Helena, Walt Disney World fanatic, captured footage of DiVine walking around the Park and posing for Disney Guests. Brenda shows DiVine walking, ethereally, down the path to various places, and we’re so happy to see her. The full TikTok Post is below:

Have you ever been able to see Di Vine on your Walt Disney World Resort trip? Leave us a comment below!

Comments Off on Fan-Favorite DiVine is BACK at Disney!