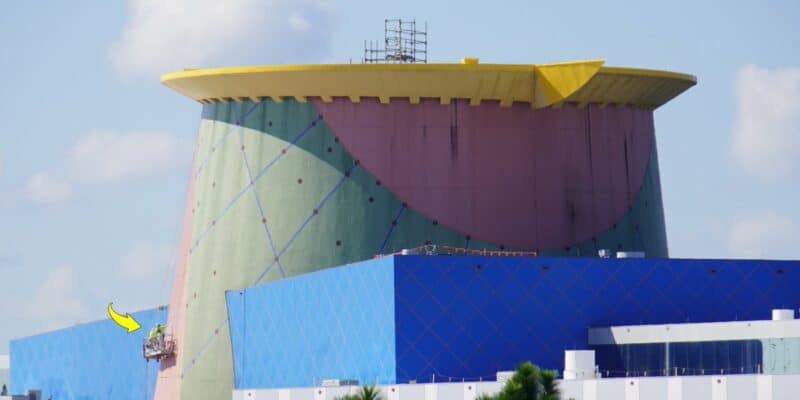 If you have been to Disney Springs, you know that the area’s skyline is absolutely stunning.

With all of the large buildings that are so uniquely shaped, plus Aerophile – The World Leader in Balloon Flight always making the sky look like a postcard, it is easy to get swept up in the gorgeous views. That being said, some of the buildings in the Disney Springs area have been there for quite some time, and touch-ups are often needed to keep them looking fresh.

Recently, photographer Bioreconstruct saw workers repainting Team Disney, which is directly across from Disney Springs. As you can see, the building’s pink and green colors are heavily faded from time and the Florida sun, so a paint job is definitely needed.

At the moment, we do not know if the workers are just making a few touch-ups to the building, or if the entire building as a whole will see a new pop of color. Regardless of the outcome, an update will surely be an improvement! Although the building is not located in Disney Springs, it is seen by many who enter the downtown district, and with its fun shape and colors, it instantly pulls your focus.

In the photo, we can also see scaffolding on the roof of the building, which likely indicates that there is added work going on there as well.

As noted by Disney Fandom, Team Disney is:

The administrative headquarters of the Walt Disney World. It opened in 1991 and is three times larger than the Team Disney Anaheim building. Designed by architect Arata Isozaki, it sits across from Disney Springs near the Walt Disney World Casting Center. It claims to hold the largest sundial in the world. It is home to Finance, Accounting, Business Insight & Improvement, and Legal departments. The building also features large silhouettes of the dwarves from Snow White and the Seven Dwarfs at the front entrance of the building.

What other areas of Walt Disney World Resort do you think need to see an update?