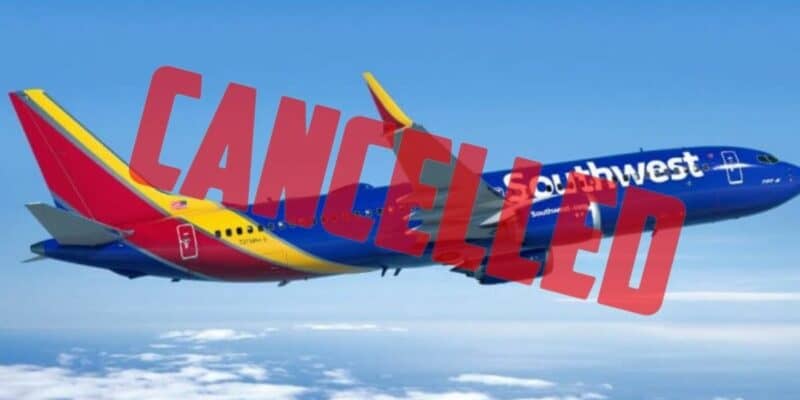 Travelers are forced to find alternative plans as Southwest Airlines, the world’s largest low-cost carrier, canceled over 2,000 flights this past weekend — and counting.

On Saturday, more than 800 Southwest flights were canceled nationwide and the cancellations continued into Sunday as travelers were stranded in airports across the country, including Orlando International Airport, due to more than a thousand flights being canceled last minute.

Unfortunately, the cancellations are continuing into the holiday as this morning, Monday, October 11, 337 flights have already been reported canceled, according to the aviation tracking website FlightAware.

Southwest Airlines took to Twitter on Saturday, when the cancellations first started, to explain exactly what was happening, to which they said:

ATC issues and disruptive weather have resulted in a high volume of cancellations throughout the weekend while we work to recover our operation. We appreciate your patience as we accommodate affected Customers, and Customer Service wait times are longer than usual.

ATC issues and disruptive weather have resulted in a high volume of cancellations throughout the weekend while we work to recover our operation. We appreciate your patience as we accommodate affected Customers, and Customer Service wait times are longer than usual. (1/2) pic.twitter.com/o1scQJ5lLb

CNN reached out to Southwest Airlines for a statement, to which they reported:

It [Southwest Airlines] told CNN late Sunday that getting operations back to normal was “more difficult and prolonged” because of schedule and staffing reductions made during the pandemic.

“We’ve continued diligent work throughout the weekend to reset our operation with a focus on getting aircraft and crews repositioned to take care of our customers,” the airline said in a statement.

Their report continued with a statement from the Federal Aviation Administration, who said airlines are experiencing delays because of aircraft and crews being out of place:

“Flight delays and cancellations occurred for a few hours Friday afternoon due to widespread severe weather, military training and limited staffing in one area of the Jacksonville Air Route Traffic Control Center,” the FAA said.

Scott McLaughlin and his family spoke to My News 13, explaining that they are just trying to head back to Arizona after visiting Central Florida:

“We had no idea until we got here now we realize flights could be missed, but hopefully we get there safely with no problem,” he said.

And Lilly Sosa and her family, who are from Brownsville, Texas, were supposed to fly home Sunday from Orlando International Airport after a week at Walt Disney World, but their Southwest flight was also canceled, and they were left stranded trying to find an alternative plan. Per My News 13:

“They canceled our flight at one in the morning, we were flying to Texas,” Sosa said.

Sosa said they could not get a flight home until Wednesday. They were told air traffic control issues and weather were the reasons. They then decided to rent a car instead.

“We are going to drive all the way back,” Sosa said. “It’s close to a 20-something hour drive.

Were you supposed to fly Southwest this weekend? Did your flight get canceled? Let us know in the comments below.