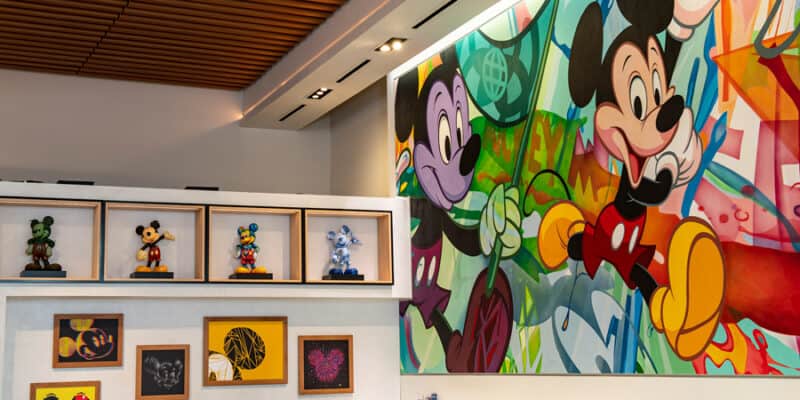 Over the past year and a half, the world has gone through some unexpected and unprecedented times that have affected us all. No matter where in the world you are from, you would have seen the effects that the COVID-19 pandemic caused on the workforce and economy. At Walt Disney World Resort, it was no different.

We saw tens of thousands of Cast Members lose their jobs as the theme parks would close for months and reopen in a limited capacity. Of course, we are finally starting to see many Cast Members return to work, but many were worried about how their projects would progress during the Park’s closure.

Disney’s Imagineering team working on EPCOT and specifically the Creations Shop did not know what to do, knowing there was so much work to be done in order to open the store for the 50th anniversary of Walt Disney World. Still, they were not able to be on site. During the 50th anniversary media event, Inside the Magic was able to speak with the creative team on the opening on the Creations Shop and discovered a fun story about how Disney’s Imagineering team dealt with the pandemic and not being able to be at Disney to create their magic.

When the Imagineering team was stuck at home unable to return to work, although many were still unsure if their jobs were secure and what their career with the company would look like due to the pandemic, they continued to make sure that they would do what they could to get more work done. When you enter the Creations Shop, you will notice that many Mickey Mouse sculptures surround the store.

These sculptures are all very unique and give our favorite mouse a very different look which is perfect for the store, which is meant to inspire creativity. Well, it seems that each of those statues was created off property! Disney’s Imagineering team worked in their backyards and garages, making the sculptures during the pandemic, and once they were allowed to return to work, they brought their version of Mickey Mouse with them!

It just goes to show how hard Disney’s Imagineering team will work to ensure that they are able to bring their vision to life on time. It also sends a message to those entering the store that you can create anything or do anything no matter where you are, even in your own garage.

What do you think of EPCOT’s Creation Shop? Let us know in the comments below.