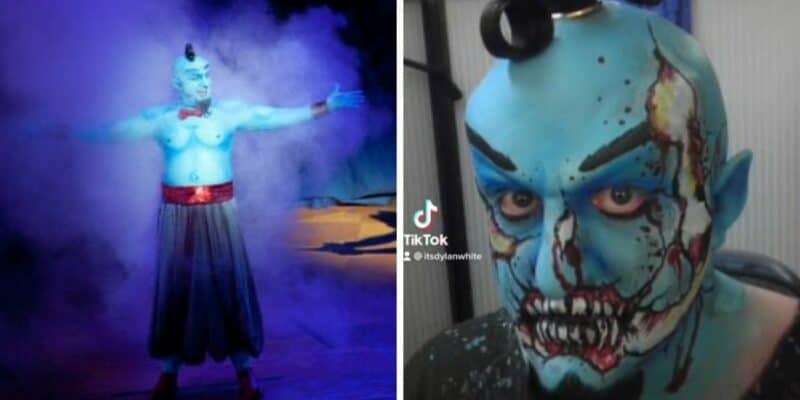 Former Disney entertainer Dylan White (who played Genie in Aladdin: A Musical Spectacular) is very active on TikTok and loves sharing some behind-the-scenes stories — including this one where he used to scare other Cast Members with a spooky Genie look!

For starters, if you are not familiar, Disney’s Aladdin: A Musical Spectacular was a Broadway-style show based on Disney’s 1992 animated film Aladdin at Disney California Adventure. Disney entertainers burst out into song and dance as they told the story of the animated film, Aladdin.

However, the show closed in 2016 and was replaced by a musical stage show inspired by Disney’s 2013 animated film Frozen.

The good news is we can still relive this show as former Disney entertainer Dylan White shares fun stories and clips from past shows. One of the stories that is getting a lot of attention is when White used to turn into Zombie Genie and scare other Cast Members.

White explained that every day there were four shows and two Genies — each Genie would take two shows. However, if you were the Genie in the first two shows, you would get your makeup taken off, but would still be on standby in case something happened during the second half of the day.

But during Halloween season, they had one makeup artist who instead of taking off the Genie’s makeup, would instead put more makeup on so Dylan White would go around, hiding in certain spaces and scaring Cast Members looking like a zombie Genie!

See the video and photos below:

Could you imagine being a Cast Member and seeing zombie Genie when you were least expecting it? It sounds like White used to have fun during the spooky season even though Aladdin is not a horror movie at all!

Were you able to ever watch Disney’s Aladdin: A Musical Spectacular at Disney California Adventure? Let us know in the comments below.