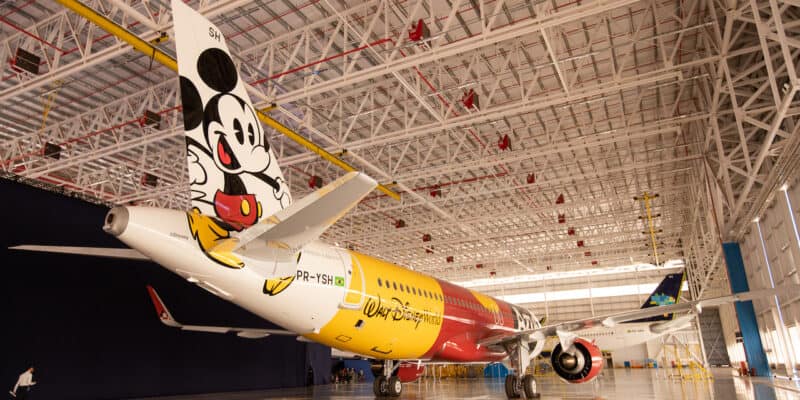 When they land, Guests can enjoy the 50th anniversary decor showered throughout the airport, including a photo-op location provided near all the main stores in the airport. And for some Guests, the magic begins when they step on the plane. As we have previously reported, Southwest is celebrating its 50th anniversary with Disney World, as they have wrapped one of their places to have the signature 50th anniversary look on it. Not only is the outside of the place stunning and magical, but all of the shades within the plane show off fun Disney characters.

Related: Southwest Is Giving Away 50 Trips to Walt Disney World!

Now, it seems another airline is joining the magic with a Mickey Mouse-inspired aircraft! As noted by Disney Parks Blog:

Last week, Azul Linhas Aéreas presented an Airbus A320neo plane inspired by the mouse that started it all. The first of four red- and yellow-colored aircraft inspired by Mickey Mouse was unveiled during a magical event held at the airline’s hangar in Campinas, Sao Paulo.

At the first launch, Mickey Mouse was there to celebrate with Guests, as this new look ties in with the 50th anniversary celebrations. It seems Azul will debut three additional Disney character-inspired aircraft in the coming months. These planes will be operating domestic routes through nearly 50 Brazilian airports.

Unlike the Southwest decor, these planes will follow Mickey’s classic red, yellow, black, and white colors. The back wing of the aircraft has a current illustration of Mickey Mouse, reminiscent of his depiction that we see today in the Mickey Mouse shorts, and on the nose of the plane, we can see Mickey’s nose and his big smile underneath.

This new collaboration will indeed have international Guests thinking about taking a trip to The Most Magical Place on Earth once they see it through the airport windows, and with international travel opening back up, now is the perfect time for Disney to begin once again enticing more Guests to visit the parks.

What do you think of these new Disney planes? Let us know in the comments below!