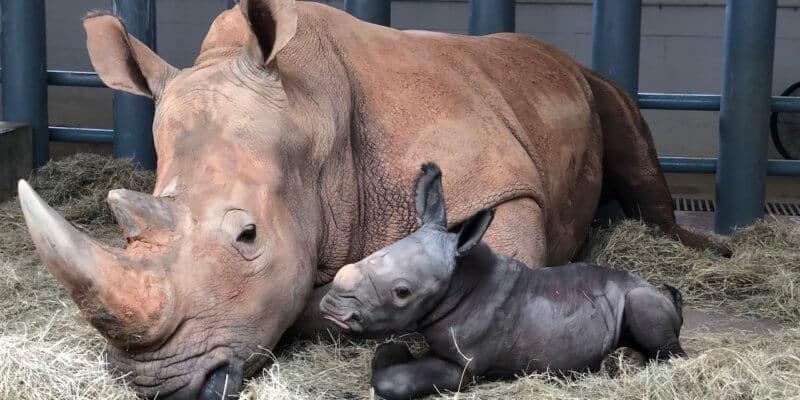 It is always an exciting day when the team at Walt Disney World Resort’s Animal Kingdom can celebrate the birth of a new animal. Not only are the new additions absolutely adorable, but they help add to various animal populations that Disney is trying to help build back up. Whether it be a cute baby hippo, a sweet baby giraffe, or maybe a baby gorilla clinging to its loving mom — births are always a happy time.

However, some births at Disney may mean a little bit more than others. While Disney’s Animal Kingdom is home to many animals, some of them are there for a special reason. More and more animals species are becoming endangered, so Disney is trying to help certain species come back from the brink of extinction by keeping them at the Park and trying to breed them in a safe environment.

One such endangered species is the white rhinoceros. According to the World Wildlife Federation, there are only about 18,000 white rhinoceros left, with only two living in Northern Africa — a majority live in Southern Africa. A species becomes endangered when its population declines by 50% to 70% over three generations or 10 years, whichever is longer, per National Geographic.

Luckily, the rhino population is slowly increasing, thanks to places like Disney. Dr. Mark Penning, Vice President: Animals, Science, and Environment, shared the exciting news of the birth on Instagram, along with a picture of the new addition.

🦏🦏🦏 BABY NEWS! Our team of animal care experts welcomed our newest baby animal to the family this morning – an adorable white rhino calf!

White rhinos are endangered, so this birth is extra special for this incredible species.

It’s important to give first-time mom Jao and her newborn ample time to nurse and bond backstage, so the calf’s sex and weight might not be known for some time.

Check back soon for more photos of this adorable pair. 🦏🦏🦏

Not only does the white rhinoceros suffer from a declining population due to deforestation and commercial building in its living area, but just like elephants, the rhinos are hunted for their ivory horns. Although companies like Disney have been working hard for years to try to combat the declining populations and for animal conservation.

Disney Conservation is committed to saving wildlife and building a global community inspired to protect the magic of nature together. Since 1995, the Disney Conservation Fund has directed $100 million to support nonprofit organizations working with communities to save wildlife, inspire action and protect the planet. Disney Conservation Team Wildlife leads best-in-class scientific programs to conserve wildlife in Disney’s backyard and beyond, connects people to build a network for nature, and cares for the planet through everyday actions.

Guests can often see Disney’s efforts to help the endangered animal populations while visiting Animal Kingdom Park. One of the most popular rides at the Park is Kilimanjaro Safaris where Guests are taken on a ride through the African Savannah. If they are lucky, they may be able to see the new babies that Disney has welcomed, after the animals have been thoroughly checked by a doctor and cleared to be out on the Savannah.

So far, four new babies have been born at Animal Kingdom’s Kilimanjaro Safaris just this year! The Park has welcomed a new Hartmann’s mountain zebra, a Nile hippopotamus calf, a western lowland gorilla, and now the white rhino.

You can read more about Disney conservation by clicking here.

Are you excited to see a new white rhino join the ranks at Disney’s Animal Kingdom? Let us know in the comments!