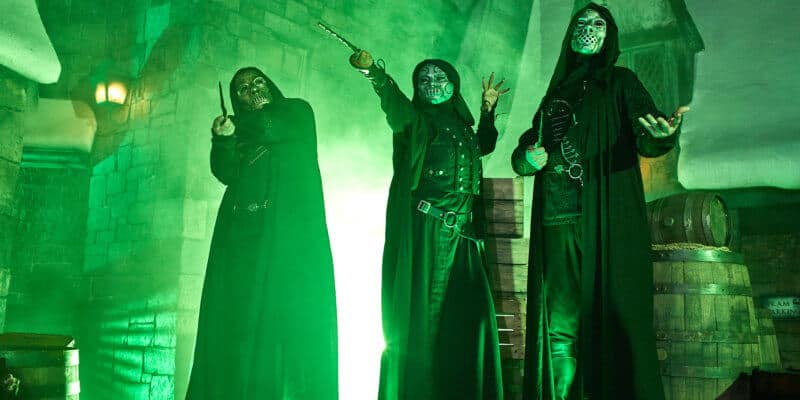 If you are a fan of Harry Potter, you likely know about the dark wizards known as Death Eaters. This Halloween season at Universal Orlando Resorts Islands of Adventure Death Eaters come out to terrorize Guests alongside the Dark Arts show on Hogwarts Castle!

Recently we reported that the Dark Arts at Hogwarts Castle show would return to Hogsmeade in Islands of Adventure, and it has! You can catch this fantastic spooky show once the sun goes down.

Unlike other Halloween offerings at the Universal Orlando Resort such as Halloween Horror Nights, this show does not come at an extra ticket charge! So be sure to head to The Wizarding World of Harry Potter – Hogsmeade when the sun sets to see the land transformed.

In addition to the Dark Arts at Hogwarts Castle Show, Death Eaters appear in Hogsmeade village. They roam the streets and shops of Hogsmeade searching for other followers of He-Who-Must-Not-Be-Named! During the Halloween season, it is fun to see the Dark Arts celebrated in the Wizarding World of Harry Potter. But it is the interactions with the Death Eaters that truly get you in the Halloween spirit.

Check out this TikTok by Universal fan, MissWizardingWorld, who shared a look at the Death Eaters arriving in Hogsmeade for an evening of frightful fun.

This is a great time to throw on your robes, grab your wand, and head over to Hogsmeade in the evening for a thrilling evening of Dark Arts! Here is what Universal had to say about the Death Eaters coming to Hogsmeade:

“As darkness falls in Hogsmeade, the all-consuming Dark Arts will be unleashed as ominous green light and fog floods the village. Death Eaters – devoted followers of Lord Voldemort – will appear and lurk amongst guests with complete disregard of wizarding laws.”

Let us know if you will be heading to Islands of Adventure to experience this Halloween offering in the comments below!