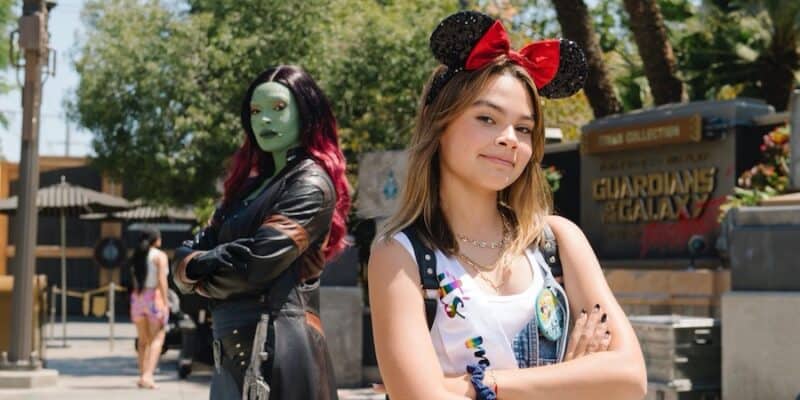 We have been tracking many celebrities who have been visiting Disneyland ever since the theme park reopened earlier this year.

Not only is Disneyland based in California, a state which, of course, boasts a tonne of Hollywood stars, but it also opened a new wing of Disney California Adventure with Avengers Campus. With the new Marvel-themed land opening, many stars of the Marvel Cinematic Universe have congregated in the Happiest Place on Earth to check out when is going on.

We have seen stars such as Paul Rudd, Anthony Mackie, and so many more walk into a world that they know very well, and now, another Avenger has entered Avengers Campus to spend her birthday there! We know Zoe Saldana played Gamora in both Guardians of the Galaxy and Avengers: Endgame, but she was not the only Gamora out there.

The iconic scene in Avengers: Infinity War that showcases young Gamora with Thanos before he destroyed her city is one that is incredibly moving and well done, thanks to the acting chops of Ariana Greenblatt. Disney Parks Blog has now shared that Ariana has been celebrating at Disneyland Resort! When asked why she chose to visit Disneyland, Ariana responded:

I decided to spend my birthday at Disneyland because I always have the best time at the Park. My family and friends were talking about going all summer and it felt awesome to finally get back to Disneyland with my loved ones. I literally stayed until the park closed!

Ariana also brought up what it was like to see herself on-screen in the films.

Scary at first but I feel so accomplished and love seeing the audience reactions. It’s one thing to see what you did on set but then when you see the final product with music and effects, it takes on a whole new life.

Disney then went on to promote their new show What If…?

Want to see the latest unforgettable, heroic content? Be sure to check out the new series “What If..?” streaming now, only on Disney+! “What If…?” flips the script on the Super Heroes, reimagining famous events from the films in unexpected ways.

It seems that Ariana had a great time visiting Disneyland. The actress most recently appeared in The Boss Baby, as well as In The Heights.

Where in Disneyland Resort would you choose to spend your birthday? Let us know in the comments below!