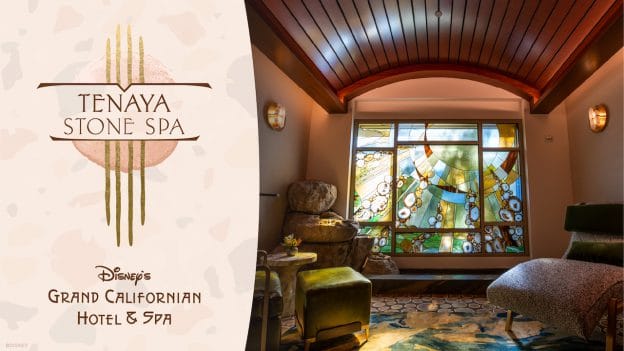 Disney has just announced that a magical new addition to the Disneyland Resort is opening very soon in just a matter of weeks!

Note that, at first, the spa will only be available for Guests staying on Disney property at one of the three hotels of the Disneyland Resort (the Disneyland Hotel, Disney’s Paradise Pier Hotel, and Disney’s Grand Californian Hotel & Spa). The Tenaya Stone Spa will be open to all other Guests at a later date.

Here are the details just released by Disney:

Inspired by the spirit of nature and California heritage, this full-service spa is a rejuvenating haven. Enjoy a spa day your way and choose from an array of luxuriating body treatments, massage and salon services, all performed in this serene setting.

“The spa name Tenaya (pronounced ten-eye-a) can be interpreted ‘to dream’ in the indigenous culture of the Yosemite Valley,” said Dawn Jackson, a Native American cultural advisor within Disney, who began working on the project as an Imagineer on the Story Development team.

“For modern-day travelers seeking a respite to dream and recharge, the spa provides an opportunity to relax into a dream-like state, a reverie of being lost in one’s thoughts, regaining balance within themselves,” Jackson added.

In Disney’s official announcement of the spa’s upcoming grand opening, the company shares more about the inspiration behind this enchanting spa at the Grand Californian. Tenaya Stone Spa is a new, 6,000 square foot facility at the most luxurious hotel on Disneyland Resort property. Walt Disney Imagineering drew inspiration from the Arts & Crafts movement, indigenous cultures of California, the spirit of nature, and, naturally, the Craftsman design of the hotel in which the spa is located.

Tenaya Stone Spa will offer a variety of spa treatments for Guests, including but not limited to massage therapies, herbal body treatments, foot treatments, salon services, and more. We noticed that Disneyland was recently hiring for staff for the new spa, so we are excited that an opening date and additional details have just been announced.

Stay tuned to Inside the Magic for more information about Tenaya Stone Spa and other happenings at the Disneyland Resort, the Happiest Place on Earth!

Are you excited for Tenaya Stone Spa to officially open on September 16? Click here to book your Disneyland trip so you can be among the first to experience this intimate relaxation destination!

Comments Off on All-New Disney Spa Opens NEXT MONTH!