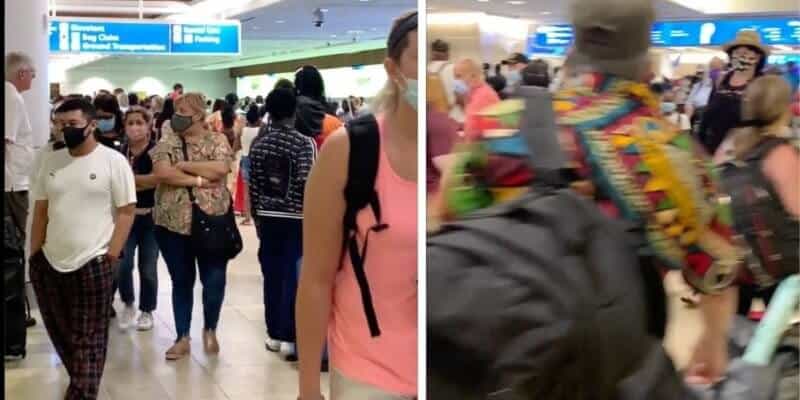 With many travel restrictions beginning to lift and ease, and vaccinations readily available to many, travel to Disney World is definitely beginning to see an increase.

With Park capacity moving up, it has become evident that more and more Guests are starting to travel to the Most Magical Place on Earth as crowds continue to grow at the theme parks. With the increase in travel demand, it seems that airlines are barely able to keep up, which is resulting in multiple flight cancellations at Orlando International Airport.

Today, it was reported that Spirit Airlines canceled 22 outgoing flights from Orlando International Airport out of their 73 flights. The cancellations are due to “system-wide disruptions that began during the weekend.” Southwest, American, Frontier, and other airlines have already seen similar issues this summer, so it seems that the problem is widespread and not airline specific.

“I think the question of why it’s happening is a combination of weather with afternoon storms and lightning; airline staffs are reduced by COVID not just here but across the nation and you’ve got a huge spike in travel. It’s all of that, a perfect storm.”

So, it seems that due to low staffing, weather, and a pent-up travel demand that airlines were not prepared to handle just yet, passengers are the ones who may potentially suffer in the end. Considering these cancellations are happening on a more frequent basis, Disney World Guests should always check on their flight status during their vacation.

Although 22 flights were noted as canceled for today by the Orlando Sentinel, according to flight-tracking service Flightaware.com., 227 Spirit flights were canceled Monday, and 58 others were delayed.

Reporter Treasure Roberts (@News6Treasure) there were hundreds of Guests stranded at MCO after dozens of flights were canceled this morning by Spirit Airlines.

Hundreds of people are waiting for assistance at the Orlando International Airport after
@SpiritAirlines cancelled dozens of flights. The line at the ticket counter spans the terminal.

Coming up at 5:30, you’ll hear from angry passengers.

Hundreds of people are waiting for assistance at the Orlando International Airport after @SpiritAirlines cancelled dozens of flights.

The line at the ticket counter spans the terminal.

Coming up at 5:30, you’ll hear from angry passengers. pic.twitter.com/LcDytcHn2y

If a flight is canceled and you have to spend another night at Disney World than originally expected, ensuring you can secure the last-minute hotel is a scenario that Guests should keep in mind, especially with hurricane season upon us.

Have you ever had your flight canceled while on a Disney World vacation? What would you do if this happened to you? Let us know your thoughts in the comments below.