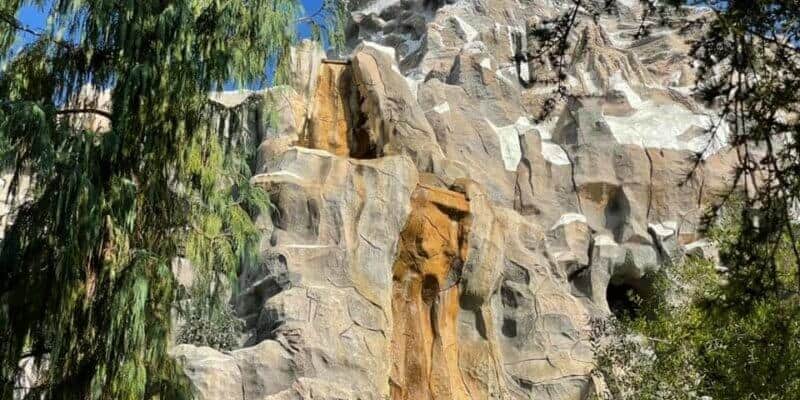 Now that Disneyland is returning to normal operations after remaining closed for over a year, Guests can experience the magic once again.

With offerings returning, the theme park experience is becoming what Guests once remembered at Disneyland Park and Disney California Adventure Park. Even with all of the advancements and steps forward that Disneyland Resort has taken during its phased reopening process, there are still instances in which we may see maintenance being done or small details of the Park’s atmospheric elements missing.

The Matterhorn Bobsleds at Disneyland first opened on June 14, 1959, and the attraction has been a staple in the theme park for years. With its massive mountain structure drawing Guests’ attention, Disney has worked hard to ensure that they maintain its appearance as it is truly one of the theme park’s classic icons. One of the key features Guests may notice are the waterfalls on the exterior.

Typically, we have seen the waterfalls running, as they are an iconic element of the attraction’s appearance (and experience, when you ride it!). However, it seems that the waterfalls have been turned off today. Below, you can see photos of the waterfalls looking rather dry!

We can see exactly where the waterfalls would typically run, as the rock work is a different color.

Related: VIDEO: Interview With Matterhorn’s Yeti Does NOT Go as Planned

At the moment, we are unsure as to why the Matterhorn waterfalls are not running this morning. The waterfalls have been active in the previous days. The attraction was also closed for refurbishment when Disneyland Park first reopened to Guests on April 30; however, the Matterhorn Bobsleds ride has since reopened, as mentioned, and Guests were able to experience it again starting July 1, 2021.

As of 8:00 a.m. PST, neither side of the Matterhorn had a running waterfall, however, at 9:00 a.m. PST the waterfall facing Autopia began running, as you can see below.

Disney describes the Matterhorn Bobsled as:

Conquer the Mountain – and a Mythic Monster
Climb into a 6-person bobsled and brace yourself against howling winds as you ascend 80 feet up into an icy cave. Take in the sweeping views at the summit and prepare for a thrilling, high-speed ride.

2 Different Routes
There are 2 bobsled tracks: 1 on the Fantasyland side of the mountain and the other on the Tomorrowland side. During slower periods, only a single track may be in operation.
More Than Meets the Eye
Matterhorn mountain certainly looks like its counterpart in the Swiss Alps— partially thanks to the excellent use of forced perspective. However, the peak is just a bit lower than the original—it’s exactly 100 times shorter than the 14,700-foot-tall real thing.

Making the Mountain
Walt Disney fell in love with the real Matterhorn while filming the 1959 live-action film Third Man on the Mountain.

Do you think that the Matterhorn Bobsled needs some updates? What is your favorite part of riding the Matterhorn at Disneyland? Let us know in the comments below.

Comments Off on An Iconic Element Is NOT Running on This Disney Attraction!