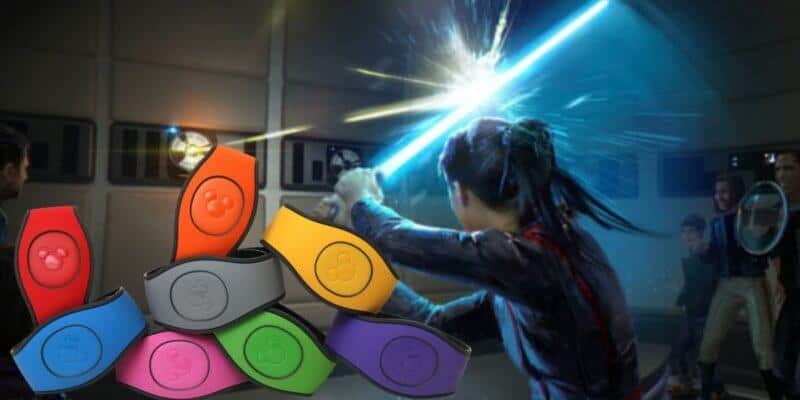 If you are a fan of Star Wars, today’s news about the Star Wars: Galactic Starcruiser hotel must have you ready to be sent off to a galaxy far, far away!

From pricing to mock itineraries, there has been a ton of information released that tells Guests what they will need to bring, how to dress, and even how the arrival process will work when Guests board the Star Wars: Galactic Starcruiser for their two-night stay and adventure. To take a look at the first official commercial for the Resort experience, click here.

Another exciting aspect that has been introduced is the databand, which will allow you to interact with elements aboard the ship and throughout all of Walt Disney World. The Walt Disney World website states:

Databands are wristbands—resembling a watch or bracelet—that allow you to interact with sensors called access points onboard the Halcyon starcruiser, Star Wars: Galaxy’s Edge and throughout Walt Disney World Resort. You may be more familiar with the name MagicBand, which is how databands are more commonly known on your home planet.

From the sounds of it, it seems that Disney may just simply be relabeling the classic MagicBand into a databand to fit the theming of the Galactic Starcruiser experience. Perhaps they will be colored differently and all identical to others on the ship so that they are differentiated from the classic MagicBand.

Related: What You NEED to Know Before Visiting Galactic Starcruiser

The interesting thing here is that Disney World discontinued complimentary MagicBands for Guests staying at their Resorts; however, the company has now confirmed that those boarding the Galactic Starcruiser will, in fact, receive a databand (MagicBand), as it is included in their Galactic Starcruiser voyage.

Of course, there is a chance that these bands are actually slightly different from MagicBands. However, the site does note that on our “home planet,” Guests would call them MagicBands. With Disney announcing that the Resort will be opening in spring 2022, the countdown is officially on!

Are you planning on taking off with the Galactic Starcruiser next year?

If you want to board this ship, we can help! Click here to get your vacation started today.

Comments Off on Complimentary MagicBands Coming to ONE Disney Hotel Experience