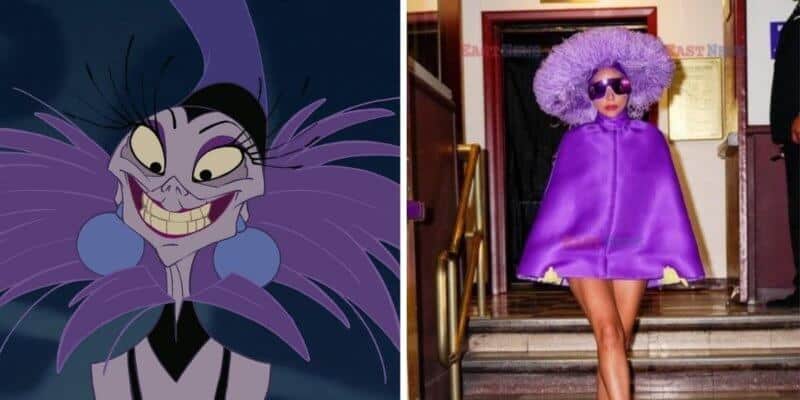 In the Disney community, a popular way of dressing is called Disney bounding.

Lady Gaga is currently in New York rehearsing for a concert with Tony Bennett and has been seen in various interesting and fashion-forward outfits, as she typically does. After walking out of Radio City Hall the other day, Lady Gaga looked like a certain Disney villain.

Gaga strutted out of the music venue in a purple Valentino’s cape dress with no armholes. As if that were not enough, Gaga added in a pair of yellow gloves, oversized sunglasses, and a Philip Treacy for Valentino ostrich feather hat that added a few feet in height on the singer. She looked just like Yzma from The Emperor’s New Groove!

Take a look at the outfit on Gagaimages (@gagaimages) on Twitter.

Funny enough, this is not the first time that Gaga has looked like the Disney villain. Below, you can check out a Reddit post from Nadstuh that shows Gaga rocking a different Yzma inspired look. If she combined the two colors and outfits, it would be perfect!

I thought Gaga looked somewhat similar to Yzma from The Emperor’s New Groove.

I thought Gaga looked somewhat similar to Yzma from The Emperor’s New Groove. from funny

The pop singer has been spotted at Magic Kingdom in the past and has also done work with Disney, from singing alongside The Muppets to appearing on Phineas and Ferb. For a while, there were heavy rumors which pointed towards Gaga playing Ursula in the live-action The Little Mermaid film. The rumors, of course, have proven to be false.

What do you think of Gaga’s Yzma Disney bound? Let us know what you think in the comments below!