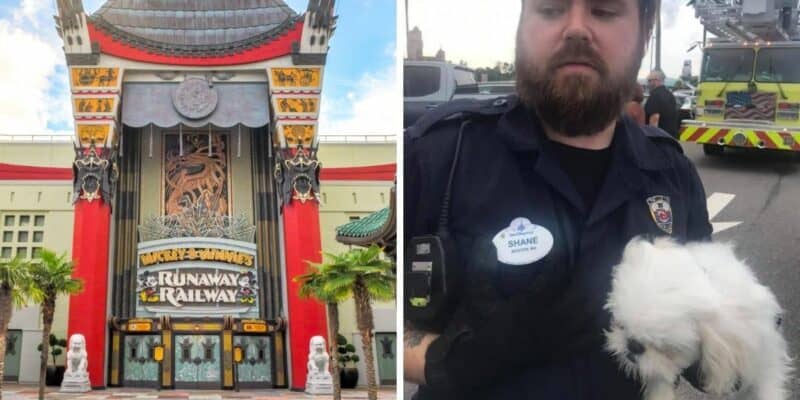 Earlier this week, a dog was rescued from a blazing hot car in the Disney’s Hollywood Studios parking lot.

A Walt Disney World Guest, Jerry Dana Frech, originally posted to the Annual Passholders – Walt Disney World Resort Facebook group infuriated as they found a dog locked in a hot car in the parking lot at Walt Disney World. Frech explained in the post, “nothing infuriates me more than people who are irresponsible with their furry friends”.

The post gathered thousands of reactions and comments, all praying and hoping the dog would be okay. Luckily, Frech took to the original Facebook post to share that Disney parking attendants, and two Disney security officers, Wilson and Shane, responded almost immediately.

They were able to also call Orange County Sheriff’s Office & Reedy Creek Fire Department to the scene. When the local authorities and fire department arrived, they quickly found that the dog had absolutely no moisture on her tongue, according to Frech, but the responders were able to get the dog help, and she is now safe.

Journalist Parker Branton took to Twitter to also share this story, explaining that a Disney’s Hollywood Studios Guest heard a bark coming from a car in the parking lot, to which they then proceeded to look inside the vehicle and saw a dog, with no one else in the car. Per Branton:

DOG RESCUED FROM HOT CAR AT DISNEY WORLD —
A Hollywood Studios park guest says she heard a bark coming from a car just before 5 Monday afternoon.

DOG RESCUED FROM HOT CAR AT DISNEY WORLD —
A Hollywood Studios park guest says she heard a bark coming from a car just before 5 Monday afternoon.

“She looked right up into my eyes and said “help”. Looking around I saw an empty bowl and a parking receipt for 11:48 am!.”, … pic.twitter.com/Q5G2vGQOzZ

Branton continued to explain that, according to Frech, based on the evaluation of the dog, the officer estimated only an hour for the Maltese pup to live. They were able to rescued the dog from the blazing hot car and gave her water.

Per another report, the dog was returned to its owner. No charges have been filed against the dog’s owner, according to the Orange County Sheriff’s Office.

If you are planning on bringing your pet on vacation to Walt Disney World, never leave it in the car while you go into the theme parks or Resort hotel. Instead, please look into appropriately boarding your pet in a safe and approved place. In fact, Walt Disney World has a per care on property called Best Friends Pet Care.

Best Friends Pet Care offers peace of mind to Walt Disney World Resort Guests traveling with pets as they offer both daycare and overnight stays at the facility. The staff includes over 75 highly trained pet care providers who will always put your pet as their number one priority.