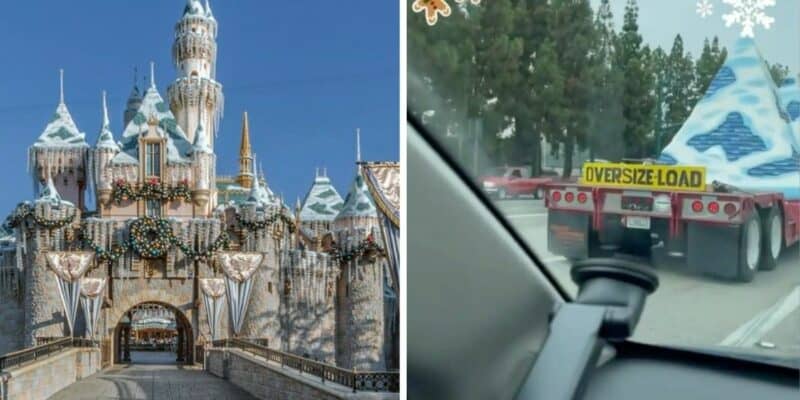 It may not even be Halloween at Disneyland Resort, but it seems that the theme park is almost ready to have snowfall on Sleeping Beauty Castle at Disneyland Park!

The Halloween season at Disneyland Resort is set to last until October 31, and shortly after, Disneyland Guests are used to seeing the theme park transform into a winter wonderland. At the moment, we have not yet heard any updates when it comes to Disneyland Resort’s Christmas season this year. Only Walt Disney World Resort has announced their Christmas offerings with Disney Very Merriest After Hours event revealed with tickets currently available for purchase.

Typically, Christmas at Disneyland does not begin until the first or second week of November. Still, with the Sleeping Beauty Castle decor and snowy roof typically beginning its transformation from mid-October, as we saw in 2019. Now, Disneyland Guests may see the same schedule come into play since the snow-covered roofs are officially on their way to the Mouse house!

The Cali Bae (@thecalibae) took to Instagram to show off the snow roof castle toppers en route to Disneyland in a video reposted from @happy.hapas — take a look:

Christmas decorations are on the way to #disneyland !! video from @happy.hapas

For now, it looks like Disney fans will need to continue to wait and see when the Christmas decor will begin to show, as well as what Disneyland Resort will be offering this year to celebrate the holidays. If we look at 2019, we know that the holiday season began on November 8 and lasted through to January 6. Disneyland Park also had the Believe … in Holiday Magic fireworks spectacular and A Christmas Fantasy parade. We have already seen the Haunted Mansion shut down for its annual Haunted Mansion Holiday transformation, which spans between Halloween and Christmas.

What do you think of Disneyland Resort already preparing to bring the snow-capped Sleeping Beauty Castle back into the Park?