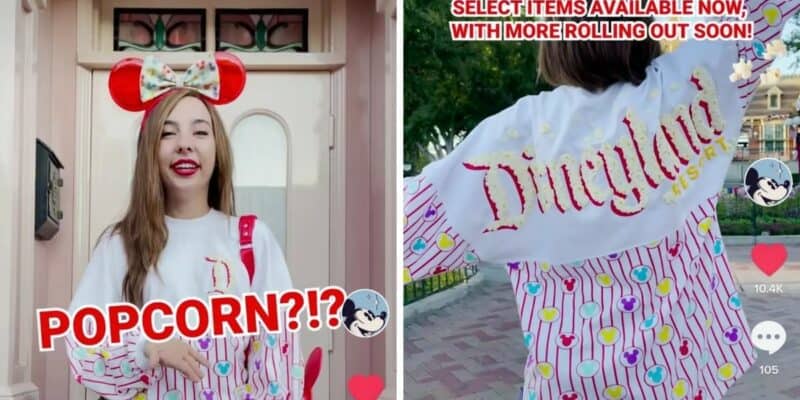 Both Images Credit to Disney Parks on TikTok

Disney has just announced a new line of merchandise that actually smells like popcorn! Here is a sneak peek at this brand-new popcorn-themed merchandise, but Disney has assured fans there is plenty more to come!

Related: The Dapper Dans Are Making a Triumphant Return to the Original Disney Park

Disney took to their official TikTok to share a look at some extra special merchandise coming to Disneyland, confirming that this merchandise will in fact smell like popcorn.

Disney teases a new spirit jersey, what looks like a pair of Crocs, and a new Loungefly mini backpack. Here is the TikTok so you can see for yourself!

Disney teased this merchandise for Disneyland, but it is unclear at this time if this will also come to Disney World or shopDisney. Our fingers are crossed that this merchandise will be available online and at both Parks!

For some Disney Parks fans, the popcorn merchandise will likely be a hit, but it could depend on how strongly the items are scented for others. For items like the spirit jersey it is unclear how heavily scented or long-lasting the scent will be! We will just have to wait and see.

Perhaps we will see more merchandise themed to popular Disney Park snacks in the future? A dole whip collection spirit jersey that smells like a dole whip would be fantastic.

You can read more about the 50th anniversary merchandise for Walt Disney World here.

In addition to the 50th anniversary merchandise, Disney World is in full Halloween swing! There is plenty of Halloween merchandise you can check out here.

Let us know what you think about the new popcorn merchandise in the comments below!

Comments Off on New Disney Merchandise That Actually Smells Like Popcorn!