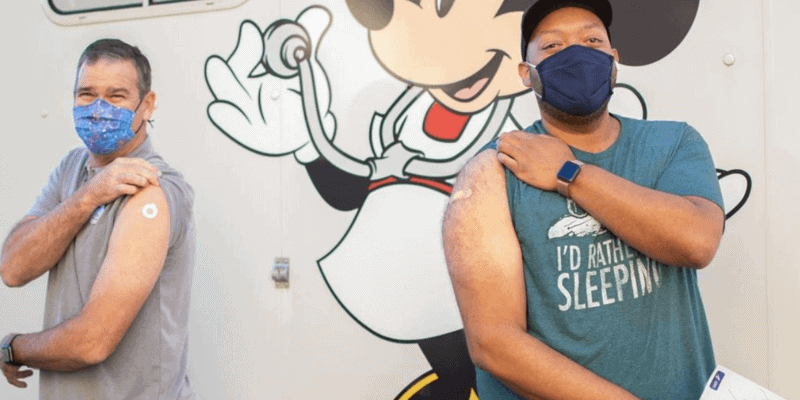 When it comes to the ongoing pandemic and the Disney Parks, many changes have been made over the past year to ensure both Guests and Cast Member safety.

Recently, we have seen Disney take a step back after completely removing mask mandates to re-implementing them in all indoor locations at Disneyland Resort and Walt Disney World Resort, including in indoor merchandise locations, on attractions, and in some queues. This change followed the recommendations made by the Centers For Disease Control and Prevention (CDC) as well as other recommendations made by Orange County Mayor Jerry Demings in Florida.

Another major change that has been quite controversial was Disney’s decision to mandate vaccinations among salaried employees and non-union hourly employees in the United States. Once the order was issued on July 30, Cast Members who were unvaccinated were given 60 days to get the vaccine. Note that the vaccine mandate applies to those employees of the Disneyland Resort and Walt Disney World Resort, as well as other Disney employees in the U.S.

The decision to make the vaccine mandatory is one that some wholeheartedly agree with, while others strongly disagree. Now, Disney CEO Bob Chapek has come out and continued to defend the decision to require vaccinations for these employees of The Walt Disney Company.

Chapel told CNBC the action is about “the greater good.” He said:

“We believe what we’d like to do is convince them that it’s in everyone’s best interest in order to get vaccinated for the greater good … and the greater good includes our guests. It goes back to that contract that we have with our guests, that we’ll operate responsibly.”

Chapek continued to discuss how Disney may not be able to control what everyone else in the world is doing, but he noted that the sheer number of Cast Members that work for the company is so large that the effort made by The Walt Disney Company in regard to this vaccine mandate could potentially make a difference.

“We believe that vaccinations are the key to really mitigating the impact of this pandemic, and we here at Disney don’t control what the rest of the world does, but we do have a quarter of a million cast members that we’d love to see vaccinated. We think we owe it to them, being in the public eye, but we also owe it to our guests at the same time.”

At the moment, Disney requires all Guests (including Guests at Disneyland in California and Disney World in Florida) to wear a mask indoors, while on attractions, in certain queues, and on all Disney transportation. However, Guests do not require proof of vaccination, so while vaccines are required for full-time salaried and non-union hourly employees, vaccines are not required for Guests. Disney is continuing their discussions with unions to try and implement the same mandate for its unionized employees.

What do you think of Chapek’s response when it comes to mandatory vaccinations for Cast Members? Let us know your thoughts in the comments below.