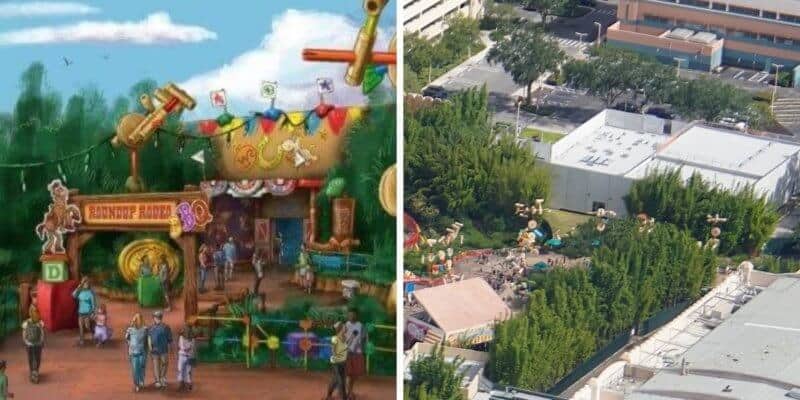 Due to the current global pandemic, construction had to come to a pause on several projects at the Disney Parks; however, as we continued to move forward, Disney is once again making progress on many highly anticipated projects, including the soon-to-be restaurant at Toy Story Land in Disney’s Hollywood Studios.

Of course, we are talking about Woody’s Roundup BBQ!

Last summer, we reported that a permit was filed by InterAmerica Stage for construction work at Woody’s Roundup Rodeo BBQ. The permit asked for support structure installation for Walt Disney Imagineering.

However, since then we really haven’t had any updates regarding the upcoming restaurant. The good news is, thanks to bioreconstruct on Twitter, we now have an updated bird’s eye view of the construction site!

Status of Roundup Rodeo BBQ. At center of this aerial photo of Toy Story Land.

Status of Roundup Rodeo BBQ. At center of this aerial photo of Toy Story Land. pic.twitter.com/PUT4i3RaPZ

As you can see in the aerial photo above, it seems that all the construction thus far is being done on the inside of the restaurant as the outside of the building still remains to be a blank slate. We cannot wait to see what Woody’s Roundup BBQ looks like once it is complete!

Using three cardboard boxes cut and taped together, Andy has created a new rodeo arena using some of his favorite toys, games, and play sets. And while some pieces are definitely western-themed, what makes this rodeo special is the broad assortment of toys that have been brought together to create a fun, colorful mashup-atmosphere that only a child could create.

Once inside, you’ll be surrounded by all of the rodeo festivities in-action as well as western town and train station play sets. And you just might spot some of your favorite Disney•Pixar characters scattered throughout the restaurant in the form of toys and game pieces including a toy version of Jessie riding on the back of a Trixie pull-toy and unique toy versions of Bo Peep and her sheep, all who appear to be performing in the rodeo together.

This immersive restaurant will surround guests with a kaleidoscope of toys, games, and playsets, providing yet another unique, fun, family-friendly dining experience that could only be had in Toy Story Land.

Are you excited to dine at Woody’s Roundup Rodeo BBQ whenever it opens? Let us know in the comments below.