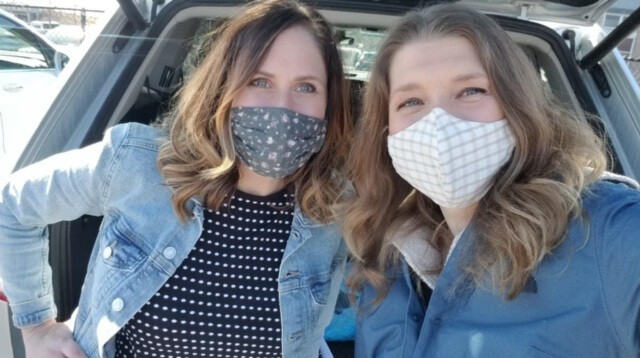 On June 22, Disney announced that, as part of its 50 Anniversary Celebration, it would be looking for a number of people called Magic Makers. Magic Makers are nominated by their communities as people who bring about everyday magic. Nominations for the roles poured in, including an honorary one for the famous Muppet, Fozzie Bear.

Well, Disney has now picked their first Magic Makers, and in great timing with International Friendship Day, the pair are good friends from Ohio. What makes the duo extra special, is that their friendship has only blossomed in the last few months.

Marla Zwinggi and Stacey Bene, both Ohio residents, met when Marla was featured on the local news for her work in aiding the elderly and at-risk members of her community in receiving their COVID-19 vaccine. Stacey had been doing the same for her community, and the two teamed up and are responsible for over two thousand Ohioans becoming vaccinated against the highly contagious COVID-19 virus.

Disney Parks Blog shared more information on the pair and their incredible work:

Marla and Stacey began working together virtually, spending about 10 hours a day for several months organizing vaccination appointments for adults when appointments were nearly impossible to get. They became friends through these efforts and became known locally as the “VacQueens,” short for Vaccine Queens. News of their goodwill spread and before they knew it, the National Guard reached out for their help.

They worked with them to expand their efforts and when the National Guard would notify them of leftover, unused, vaccines that had to be utilized quickly, Marla and Stacey helped ensure that no vaccine went to waste. “Anybody who was having difficulty finding an appointment, we took on the urgency of trying to get them that appointment as soon as possible… and what I love about working with Marla is we as a team never said we couldn’t do something,” said Stacey.

The pair spoke to Cleveland.com about what it means to them to be made Disney’s first Magic Makers and what their work means to the community:

“It feels good to be rewarded for something we did with no expectation of anything in return,” Bene said. “We just wanted to do our part during the pandemic. We knew what we were doing was really important to the people we were helping but we didn’t know that other people appreciated what we were doing on a larger scale. To hear that Walt Disney World thinks what we we’re doing is important was really cool.”

Disney will be taking nominations for Magic Makers from now until October 1, when their 50 Anniversary Celebration officially kicks off. Nominations can be made by visiting the Disney Magic Makers website, and those wishing to nominate someone can further their stories by posting #DisneyMagicMakers on Instagram, Twitter, and TikTok. Disney World will be celebrating its 50 years by picking a total of 50 Magic Makers.

Do you love Disney’s first Magic Makers? Do you have someone you would love to nominate? Let us know in the comments!