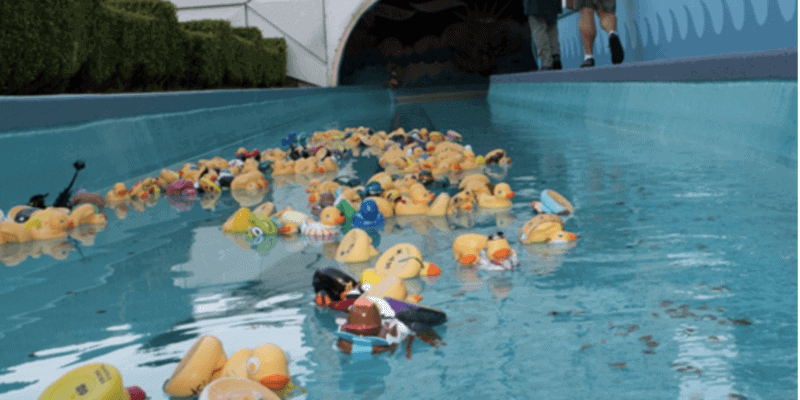 Last year, Disneyland’s annual Cast Member Appreciation Week was unable to happen because the theme parks were shut down to the pandemic. Luckily, the theme parks are open once again and Cast Members can celebrate themselves at The Happiest Place on Earth. Also returning to the party was the rubber duck race! Disney Parks Blog shared some fun information about the fun race that takes place at the “it’s a small world” attraction.

Cast members purchased and decorated $5 rubber ducks (all proceeds benefit Goodwill of Orange County) and raced them through “it’s a small world” before the park opened to guests.

After the ducks set off on the happiest cruise that ever sailed, cast members eagerly waited outside the attraction to see which duck would return first from their trip around the world. Shouts of excitement were heard as the duck that took the lead sailed out of the attraction, decorated by Ruth from Star Wars: Galaxy’s Edge.

What is so great about the rubber duck races is all the money that is given to Goodwill of Orange County. Disneyland works with several charities in the Anaheim area to help struggling residents. More information on Disney’s charity work was shared by Disney Parks Blog:

“We are proud to be a long-time partner of Disneyland Resort and so grateful to be the nonprofit recipient,” said Nicole Suydam, President and CEO, Goodwill of Orange County. “This mission work is more important than ever with the current unemployment rate for people with disabilities at 12.6% and we are committed to providing support, trainings and opportunities for everyone who wants to work.

This year’s Disneyland Cast Member Appreciation Week took place just as Disneyland prepares to celebrate its 66 birthday — which be on Saturday, July 17. There will be a number of fun ways for Guests to celebrate the special day as well, including a character cavalcade and specialty treats.

What do you think of Disneyland’s Cast Member Appreciation Week? Let us know in the comments!

CLICK HERE to book your Disneyland Resort vacation today with our friends at Academy Travel!