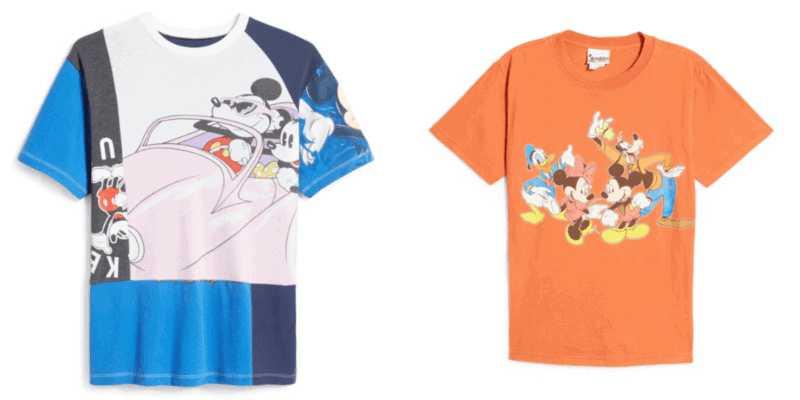 There are few things that Guests can’t find in terms of merchandise when visiting a Disney theme park. There’s everything from t-shirts to pajamas to bubble wands and kitchen pieces. Disney has managed to come out with something that covers almost anything you could dream of. Disney is on top of its game when it comes to always having new merchandise, which means that a lot of the older merchandise can end up in secondhand stores as people replace their beloved items with new ones.

However, one high-end store is currently selling secondhand Disney clothing for top dollar. Visitors to the Nordstrom site will be able to find a number of used  Disney t-shirts and tanks for sale, but they might be in for a little bit of sticker shock. The average t-shirt price is $65, but there are also some tees and tanks that cost as much as $150.

The high cost of these shirts is a huge jump from what Guests would pay for a new shirt at a Disney location, which cost an average of $36.99. Even the higher-priced spirit jerseys run between $69 and $75. According to the Nordstrom site, the fact that the shirts are previously owned is part of their charm. In the clothing descriptions, Nordstrom says:

This preowned piece has unique wear that adds to its appeal.

Even though the price tag may be high, if you are a fan of vintage, then you may want to take a look at what Nordstrom’s has to offer. A simple “Disney t-shirt” search will give you over 200 results. However, if you are interested, you may want to visit the site sooner rather than later. The fact that these are secondhand pieces most likely means that they only have one of a specific item available and the sizes will be limited.

What do you think of Nordstrom charging $65 for a used Disney shirt? Would you spend that kind of money? Let us know in the comments!