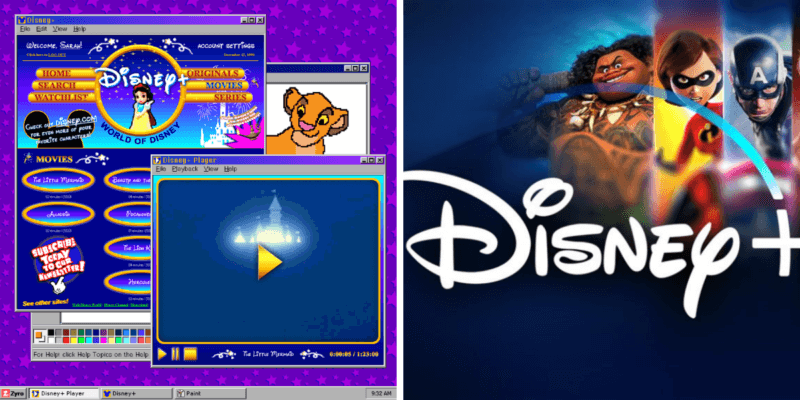 Disney+ is the new streaming service that burst onto the scene in late 2019. The streaming platform is user-friendly and designed to optimize your experience while enjoying hit shows such as The Mandalorian, WandaVision, Loki, and more.

But what if Disney+ was around in the ‘90s? Well, one website decided to find out!

Harkening back to the ‘90s and early 2000s Disney websites we all know and love, the team at Zyro decided to find out what Disney+ would look like if it were created in the ‘90s. You will not believe how accurate this image is, as it truly captures the magic of those early days of the internet!

How fun! I think many Disney fans remember visiting the Disney website back in the ‘90s and early 2000s that had a very similar style to this. Zyro did a great job capturing that magic and adding some key elements of Disney+ such as the watchlist feature.

They even made a floppy disk for Disney+ as well!

You can see the Zyro website, which has done this with other platforms in addition to Disney+, here.  If that doesn’t hit your nostalgia bone I do not know what will!

So that is what Disney+ could have looked like in the ‘90s, but what is happening with the platform now?

The Mandalorian just tied for most Emmy nominations, which is undoubtedly a big win for the Dinsey+ series. In addition, the Marvel series did not do too bad for Disney+ either, with WandaVision and The Falcon and the Winter Soldier also racking up their fair share of Emmy nominations.

Disney+ has plenty more films and series lined up from Disney, Marvel, Star Wars, Pixar, National Geographic, and more! Most content on Disney+ is included with a subscription to the streaming service, however, Disney+ also offers Premier Access. Premier Access allows you to watch certain films while they are in theaters from the comfort of your home for an additional fee. Typically Premier Access costs $30. Mulan, Raya and the Last Dragon, and Black Widow are all Premier Access titles.

Premier Access movies will become free on Disney+ after a few months.

What do you think about this ‘90s version of Disney+? Let us know in the comments!