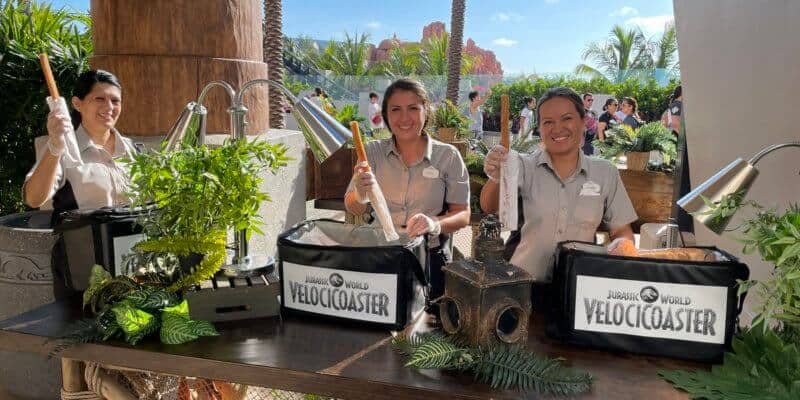 With VelociCoaster finally opening today at Universal Orlando Resort, it seems that Guests are not the only ones celebrating!

Today, Universal Orlando Resort is giving out free churros at Islands of Adventure to celebrate the opening of Jurassic World VelociCoaster, which means that any lucky Guest visiting the park can potentially get a complimentary sweet treat! As you may know, any theme park snack is typically a few dollars extra than outside of a theme park, so when something is free, that is always a real treat.

Universal is giving out free churros at the end of Jurassic World #VelociCoaster.

Universal is giving out free churros at the end of Jurassic World #VelociCoaster. pic.twitter.com/dptJ9zMu6w

And Ashley was not the only one enjoying a free churro; other riders also snagged one!

Off the ride before 9am and enjoying my opening day complementary churro (it ~WAS~ a churro stand!!!) #VelociCoaster #VelociChurro

Off the ride before 9am and enjoying my opening day complementary churro (it ~WAS~ a churro stand!!!) #VelociCoaster #VelociChurro pic.twitter.com/VRBPiq63ig

VelociDustin (@whatsbrakebills) referenced the fact that many Guests initially wanted a churro stand by the ride, and now, we finally got one!

I guess we can talk about the churro stand now ? @UniversalORL #VelociCoaster pic.twitter.com/AXupCZxblx

Considering how cheeky Universal’s Twitter account can get, we would not be surprised if this offering was a direct reference to the consistent chatter that previously took place about a churro stand next to VelociCoaster.

The churros that are being given away are not the blue icing drizzled specialty churros that are specific to Jurassic Park but rather just a regular churro. That being said, it still is a great way to commemorate the opening of a new ride. Considering Guests are already beaming as they exit the attraction, adding a free churro is a cherry on top of a fantastic experience.

We are unsure for how long the free churros will be available today, so if you want to score one, we suggest heading to VelociCoaster as soon as possible!

Would you be more likely to go to Universal if you knew they were giving out free churros?