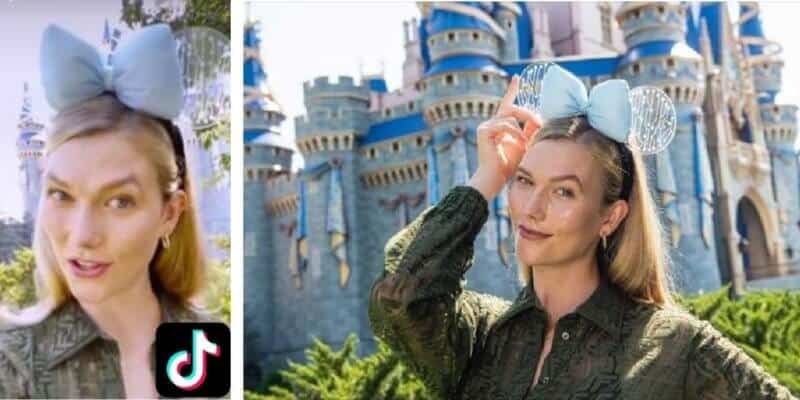 It comes as no surprise that Mickey Ears are known to be one of the biggest Disney collectible items! When Guests visit a Disney store, the headwear section is usually among the most crowded, with tons of new Mickey and Minnie ears inspired by Disney classic characters, films, and Park attractions.

One of the biggest Disney releases in merchandise has been the Disney Parks Designer Collection Ears. These stylish — and usually pricey — ears are designed by some of the most influential celebrities, designers, and Disney Imagineers (including Joe Rohde!).

World-renowned supermodel, YouTuber, and influencer Karlie Kloss shared with Disney her new journey with coding and created Minnie Ear inspired by her new hobby. Here’s a look at the new design and the secret code word you need to use tomorrow when purchasing these collectible ears.

The Secret Code is

For those who missed it, Disney Parks on TikToc posted a super sneak peek at Karlie Kloss’s new designer Minnie ears that feature a giant sky blue bow and STEM-inspired transparent ears with a cute computer engineering-inspired design!

In order to purchase these Minnie ears at Downtown Disney and Disney Spring on June 11, Disney fans will have to tell a Cast Member “Code Kloss”.  Here’s more information on each location as Karlie Kloss shared:

Karlie’s ear idea came from her passion for coding, data science, and technology. Four years ago she attended a coding class and realized that women are a huge minority within the computer science field. To provide motivation for the ladies of computing, Kloss designed these Disney ears to represent women in the technological world, and in hopes to inspire more women to join the industry.

“Before my first coding class, the idea that I could build something with code seemed nearly impossible, but after only a couple of courses, I was working with my classmates to program a small drone. I realized that, just like art and fashion, code is about creativity, and that women who have these skills have the power to shape our future – and often have. Women are essential in forging digital progress and knowing how to code is the key to exploring and creating the newest frontier.”

Did you know that Disney also provides a coding program that combines coding education and Disney storytelling? Disney Codeillusion makes learning to code for children and adults easy, fun, and adds a touch of Disney magic. Check out more information here!

Do you love these new Disney Minnie designer ears? Let us know in the comments below!