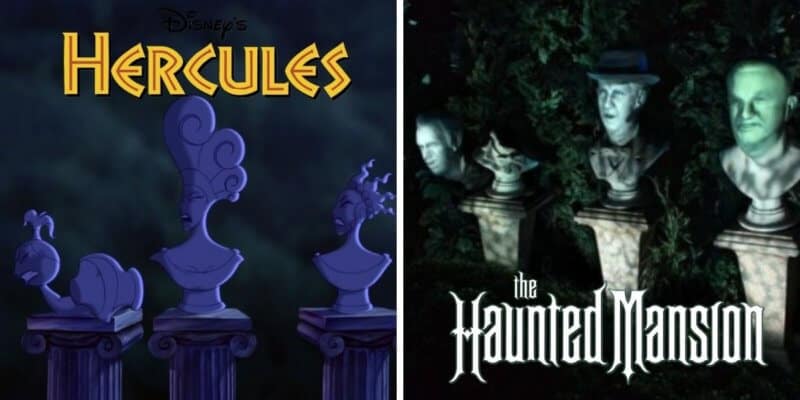 Haunted Mansion is an iconic ride located in the Disney Parks. From the grim grinning ghosts to the iconic stretching room to, of course, the Ghost Host, Haunted Mansion has a variety of elements making its fans wanting to come back for more year after year.

But did you know there is one element of Haunted Mansion that is actually referenced in a Disney animated movie?

If you are a fan of Disney’s animated movie, Hercules (1997), then you are more than likely familiar with the iconic “I Won’t Say I’m In Love” scene with Meg. Well, during that song sequence, as Meg is singing about how she refuses to admit she loves Herc, the movie flashes to the five Greek muses. Pay attention and you will notice that they look very familiar!

In the 1997 Disney film Hercules, during the song “I won’t say I’m in Love” the five Greek muses take the form of marble-busts and sing backup chorus with the second one of them from the left having her head fractured in a way identical to that of Uncle Theodore, mirroring the Singing Busts of the Haunted Mansion.

If you don’t believe us, and you need to see it for yourself, be sure to check out this clip on YouTube from Disney Definition. The part where the muses take the form of the singing busts begins at approximately 1 minute and 30 seconds into the video:

It may be a quick scene, but the reference is obvious once you know what you are looking for!

So the next time you are watching Disney’s Hercules (1997) with your family and friends, be sure to point out this Haunted Mansion reference to blow their minds.

In case you have never seen the film, Disney describes Hercules as:

Disney’s Hercules (1997) is currently streaming on Disney+. If you aren’t signed up for the streaming service, you can get started by clicking here.

Did you know about this Haunted Mansion reference in Disney’s animated film Hercules? Let us know in the comments below.