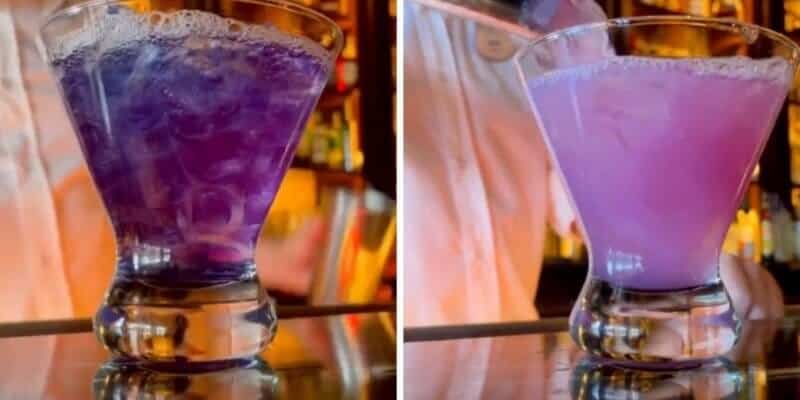 AbracadaBar is a fan-favorite spot located at Disney’s BoardWalk in Walt Disney World. The cocktail lounge instantly transports Guests back in time to the golden age of magic! And there is one drink listed on the menu that really is a magic trick.

The Conjurita is described on the menu as “a colorful margarita that never reveals its secrets”. It is made with Gran Centenario, Plata Tequila, Cointreau, simple syrup, and lime juice.

The drink is magical because once it is poured, it changes from a deep purple to the light purple (almost pink)! You can see this drink featured in Disney’s TikTok below, where the narrator says, “The Conjurita is an enchanting elixir that with a little bit of magic, changes color right before your eyes! Now, do you believe in magic?”

In case you have never visited this fan-favorite spot at Disney’s BoardWalk, it is described as:

Travel back in time to the golden age of magic as you step inside this curious cocktail lounge.

Formerly the stomping grounds for famous magicians, local illusionists and the loveliest of magician’s assistants, AbracadaBar gives interested onlookers and aficionados of alcoholic beverages alike a glimpse—and perhaps a taste—of another time and place.

According to boardwalk lore, prestidigitators would gather here after nearly every show, often staying up all night as they attempted to out-charm each other with extraordinary tricks before gathering at the bar to conjure up new cocktails.

But then, just as soon as it had appeared, the secret lounge vanished into thin air, never to be seen again… until today!

Back in the spotlight now at Disney’s BoardWalk, AbracadaBar has re-opened its doors, giving Guests like you a peek at an era long since passed—from its enchanted show posters and mystifying mirrors to vintage props and tricks—all while savoring some of the bar’s signature specialties.

Related: The Top Five Walt Disney World Bars You Have to Visit

Have you ever visited AbracadaBar? Have you tried the Conjurita? Let us know in the comments below.

Do you want to visit AbracadaBar on your next Disney World vacation? Start planning today!

Comments Off on This Enchanting Disney Drink Actually Changes Colors