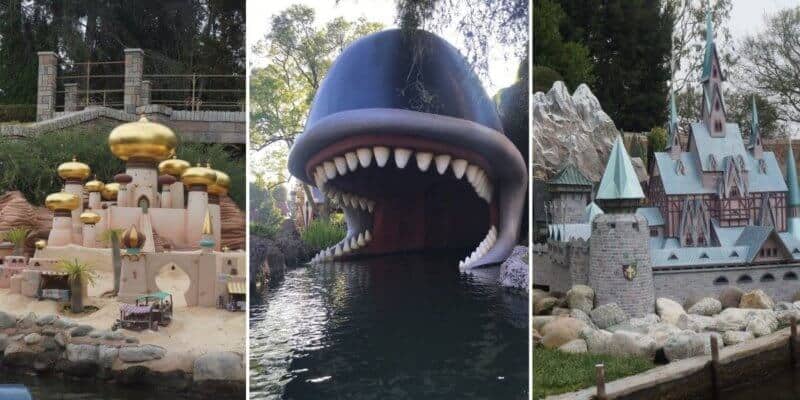 Disneyland has become more than just a theme park to many Disney fans across the world. It is a place of history and a wonderful reminder of a man who never stopped believing in his dream. Walt Disney’s legacy lives on in many Disney attractions including one he worked very hard on to perfect.

Since Disneyland reopened after the worldwide pandemic nearly took our beloved park hostage, the Storybook Land Canal Boats attraction remains temporarily closed in Fantasyland. Although many Disney fans do not agree that this ride is popular, this ride may be more important to Disneyland and many Disney fans than we think.

When Walt Disney visited the Netherlands, he was amazed to experience a miniature park and tourist attraction called Madurodam. This adorable small city showcased miniature Dutch landmarks, and Walt knew he wanted to create his own little world and a spiel boat ride through Disneyland Park called Canal Boats of the World.

The attraction opened on July 17, 1955, but did not go as planned. Walt envisioned Guests to tour around miniature landmarks from around the world but because of Disneyland spending more money than they had planned, Canal Boats of the World was cut short, and the ride was left incomplete with Guests only riding through a swampy bank with nothing to look at.

More issues arose for this attraction as the year progressed. The outboard motors on the boats were constantly overheating, and Cast Members were forced to pull the boats back by hand. Just two months after the opening of Canal Boats of the World, Disney was left with no choice but to close for extensive renovations.

A year later, this once muddy attraction became a gorgeous landmark for Disneyland. During the reconstruction of the ride, Walt Disney was very much involved and even planted a bonsai tree. The idea of having a whole new concept came to mind with miniature lands from our beloved classic Disney films replacing great landmarks of the world.

Quiet and battery-powered boats became the perfect means of transportation for this ride as Cast Members were able to connect with up to twelve Guests and act as a tour guide describing each Disney scene such as The Toad Manor from The Adventures of Ichabod and Mr. Toad and Alice’s cottage from Alice in Wonderland.

Details of the attraction

Storybook Land Canal Boats became a success for Fantasyland. Storybook Land Canal Boats begins loading passengers from the dock as the Cast Member welcomes Guests aboard. After riding through a short cave that many Disney fans know as Monstro, (the whale that swallowed Pinocchio), Disneyland Guests are transported into a miniature world with gorgeous landscaping, shrubs, and tiny trees.

According to Wikipedia, this little land is more technical than you think as they share,

The canal contains 465,000 gallons of water, which flows via underground pipes to the moat around Sleeping Beauty Castle, the Jungle Cruise and to the Rivers of America, where it is pumped back to Storybook Land.

The attraction’s 13 boats are powered by electric inboard motors. When not in use, they are stored in a boathouse hidden behind the waterfall containing Triton’s Castle.

The houses in Storybook Land are fitted with six-inch doors and quarter-inch hinges that open and close, so the Disneyland electricians can change the lightbulbs.

Over time, Disney Imagineers have added even more details by including adding Agrabah and the Sultan’s Palace from Aladdin, Arendelle from Disney’s Frozen, and even the Tinker Bell boat and lighthouse was delicately painted gold and maroon for the 50th anniversary of Disneyland in 2005.

Now this attraction is home to 12 villages. As per the Disneyland website, here is what Guests will see when experiencing this enchanting attraction:

After the year-long pandemic, Disneyland Resort has finally returned and is more popular than ever. Right now, many of these attractions are filled with happy Disney fans, but some are still under refurbishment, including Matterhorn Bobsleds, the Jungle Cruise, and our beloved Storybook Land Canal Boats.

Since the boats are small and there are social distancing guidelines currently in place (and since all attractions have to run at a limited capacity), it seems that it wouldn’t be sustainable for Disney to run this attraction (which requires a Cast Member tour guide heading the boat) while keeping people separated from each other. But keep in mind that state guidelines will be changing on June 15. When Disneyland increases capacity and changes social distancing guidelines as part of the phased reopening process, they will be able to increase capacity and allow more people to board attraction vehicles. At that time, we predict Storybook Land Canal Boats will reopen.

Although some Disney visitors may typically just walk by this attraction, it does hold great importance to this theme park. Not only does it hold a huge piece of history, but as many Guests return to Disneyland Park this year, it will provide more for Guests to experience in Fantasyland. Walt Disney often regarded this as his favorite attraction.

Eventually, Disneyland Resort will be given the go-ahead to allow out of state visitors and increase to full capacity once more, so having all of Disneyland’s rides will become important in keeping wait times as minimal as possible.

If you are not aware, Disneyland Paris in France also has a version of this ride but is missing one huge element that Disneyland Resort holds dear. What makes Disneyland in California, so special is its interaction between the Cast Members and the Guests. Storybook Land Canal Boats is one of a kind and Walt’s vision of bringing everyone together and sharing experiences together is exactly what this attraction represents.

Do you want to see Storybook Land Canal Boats back soon in Disneyland? Is this attraction important or in need of some Disney Imagineering and reimagining? Let us know your thoughts in the comments below!

Planning to visit Disneyland soon and need help! Our friends at Academy Travel are EarMarked Diamond! Want to know more? Click the link for more information and how Academy Travel can make your Disney dreams come true!