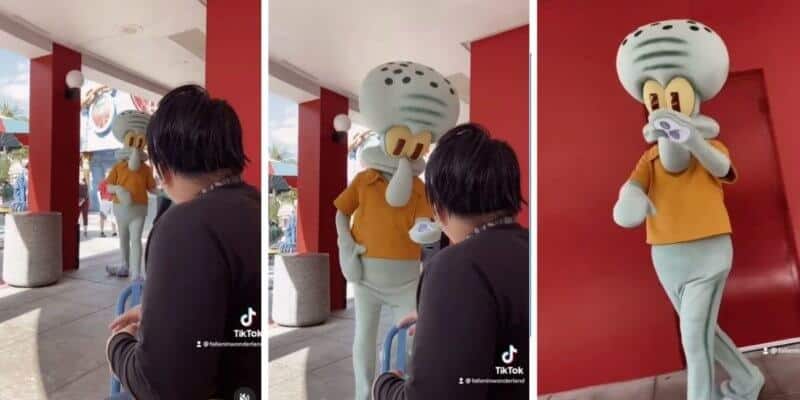 Meeting your favorite characters at Universal or Disney can often be one of the major highlights of any vacation. When the interaction is unique and memorable, it could be a story to tell for years to come!

Although many meet and greets at any theme park are usually stationary, and Guests have to line up to say hello, a special moment can sometimes happen while a character is passing through.

At Universal Orlando Resort, there is a multitude of characters that Guests can meet, such as Shrek, Donkey, the Scooby-Doo gang, Marvel characters, and more! Another popular IP that Universal has for their theme parks is SpongeBob.

Guests can often meet SpongeBob and Patrick when they visit Universal Studios Florida, and if you are lucky enough, you could end up meeting grouchy Squidward! You may be thinking, “If Squidward is so grumpy, why would I want to meet him?” And to that question, we have a video explanation!

Sam.in.wonderland (@sam.iin.wonderland) posted a TikTok to their Instagram showing a quick meet with Squidward, where the SpongeBob character gave the Guests hilarious sass and tricked them out of a high five, all while doing the moonwalk! Take a look at the video for yourself below.

The king of sass!

Sometimes, when a character has a powerful personality, those meet and greets can be the best because each interaction can play into that character perfectly! When a character is always positive, there is definitely not much to work with because most interactions will be basic waves and positive features.

However, if a character is like Squidward and has an attitude, this gives the character a lot more room to play around with their interactions and joke around with Guests, as we just saw in the video above!

It seems that Universal (@UniversalORL) loved this interaction so much that they reposted the video on their Twitter!

Universal is still navigating their way through the pandemic, which transformed a lot of meet and greets into socially distant interactions. However, just recently a new interactive DreamWorks experience was announced and a meet and greet could be underway, which means that even more character moments could be coming to Universal Guests soon!

Who is your favorite character to meet at Universal Orlando Resort?