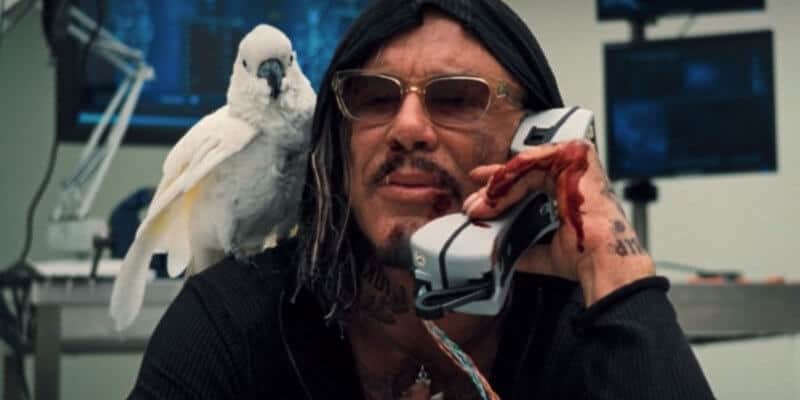 In this day and age of Marvel, a franchise actors seek out because they want to be a part of it so badly, it’s hard to imagine anyone having a bad experience.

But in the early days of the Marvel Cinematic Universe, when the franchise was still finding its feet and was far from the blockbuster juggernaut it is today, things weren’t so smooth when it came to developing characters and when it came to management—and Mickey Rourke won’t ever forget it.

The actor, who had just been nominated for an Oscar at the time he was cast as the villain Anton Vanko AKA Whiplash in Iron Man 2, has taken numerous shots at Marvel over the years for his filming experience. And he recently lashed out again in an Instagram post where, while singing praises of the longtime procedural Law & Order, he called out the “crap acting” in Marvel films.

I heard this show is been on for 20 yrs,i never knew anything about it before until the lockdown since i have all my gym equipment in my living room,6 months ago while i’ve been doing all my training at home isolating i click on this show just by accident and curiosity and have to say i’ve never seen such terrific acting ever on television! Each show that i seen and I probably seen a 1000 of them by now the producing is terrific,the direction is top class and most of all i am really impressed with this ensembles of highly talented actors.

Mariska Hargitay @therealmariskahargitay is a very concentrated actress,she is absolutely great in every episode. Her dedication and very meticulous work put her on another level. There’s very few,if any actresses in films these days that can hold her jock strap. I give her tremendous respect for her amazing ability.

“Christopher Meloni, the man brings a lot to the table with his physicality…I also took notice to the classy and highly talented intense Stephanie March, as well as BD Wong. I’m most surprised, tremendously impressed with the charisma, the attitude and swag and sincerity that Ice T brings to his particular role. What’s especially enjoying is watching commodity of this exceptional group of actors…Respect to all of you, the work that you all do is real acting, not like that crap that all on Marvel shit.

Iron Man 2 tends to be categorized as one of the weaker entries of the Marvel Cinematic Universe. It was responsible for some great moments, including the fight between Tony and Rhodey, it was a necessary bump in the evolution of Pepper and Tony’s relationship, it opened up Tony’s issues with his dad, and it gave us the introduction of War Machine and Black Widow. But the movie often ends up on the bottom of people’s lists for its uneven plot and tepid villain entries, something that Rourke has always taken issue with.

According to an article from CraveOnline, Rourke reportedly told director Jon Favreau that he wanted to make Vanko a more well-rounded villain rather than “a complete murderous revenging bad guy.” While he was allowed to do that, those scenes ended up on the cutting room floor when The Powers That Be had their final say about the editing. Clearly, that’s never sat well with Rourke, who has never missed an opportunity to point out his unhappiness.

Those who are aware of the history behind the early Iron Man films know that Robert Downey Jr. has talked repeatedly about working with Favreau to rewrite dialogue and script as there wasn’t really a solid template for the kind of movie they wanted to create. Rourke at least doesn’t blame Favreau for how his role turned out, as he acknowledges the director was game enough to let him create the character he wanted. But even before Marvel was a well-oiled machine, there was bureaucracy you couldn’t escape.

Rourke commented, “At the end of the day you’ve got some nerd with a pocketful of money calling the shots. You know, Favreau didn’t call the shots. I wish he would have.”

What do you think of Rourke’s comments? Sound off below!

Comments Off on Mickey Rourke Bashes Marvel For ‘Crap Acting’