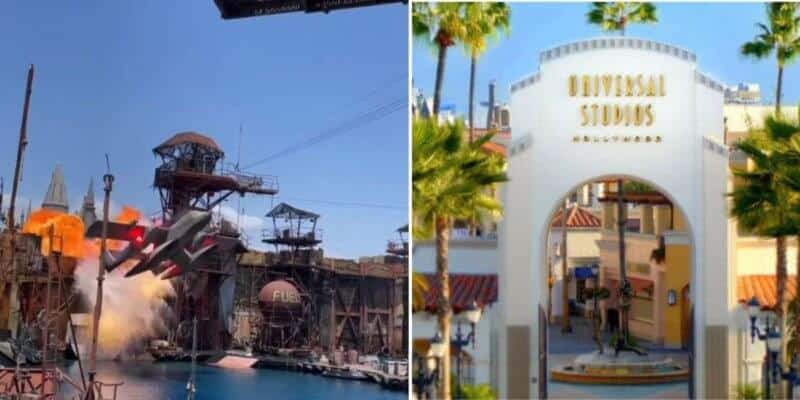 With the announcement that California will reopen its economy fully on June 15, this is huge news for theme parks including Universal Studios Hollywood. This means that in three weeks, Universal’s theme parks could move even closer towards normal operations.

With that being said, this could bring back more employees, events, and more entertainment! Speaking of entertainment, we recently came across one very popular live extravaganza that has been rated Universal Hollywood’s number one show and is back to the park, WaterWorld.

Get ready to get wet again!

If you’ve ever sat in the first few rows while experiencing WaterWorld in Universal Studios Hollywood, then you know all about the ‘Soak Zone.’ This entertainment show debuted in Hollywood in 1995 and is based on the film Waterworld with Kevin Costner. This 20-minute stunt show is like Mad Max on water, as Universal states,

With new sets, a new cast, and all new action, WaterWorld is one show at Universal Studios Hollywood you just can’t miss!

Recently, Universal fans were ecstatic to share on Instagram that Universal’s live show WaterWorld was back on the weekend. Denny or better known as @finding_denny caught an amazing clip of the show with amazing shots of pyrotechnic effects and crazy stunt performers plunging into the water on Saturday. He mentions that although the first show was on Friday, the current showtimes for Sat were 12 p.m. and 1:30 p.m. He states,

Another Universal visitor on Instagram surprised his fans that WaterWorld was officially back and states,

After reviewing the Universal Studios Hollywood app, there are currently no showtimes available. As entertainment is slowly returning to this Universal theme park, it is not guaranteed that this live show will be running, so if you are planning to see the show, please check the official website for more information and showtimes before heading to Universal.

What is your favorite Universal Show? Have you seen WaterWorld and do you enjoy the show or want it replaced? Let us know in the comments below!

Planning on visiting Universal Hollywood soon and need some advice? Our friends at Academy Travel can help!

Comments Off on Live Entertainment Returns to Universal Studios Hollywood!