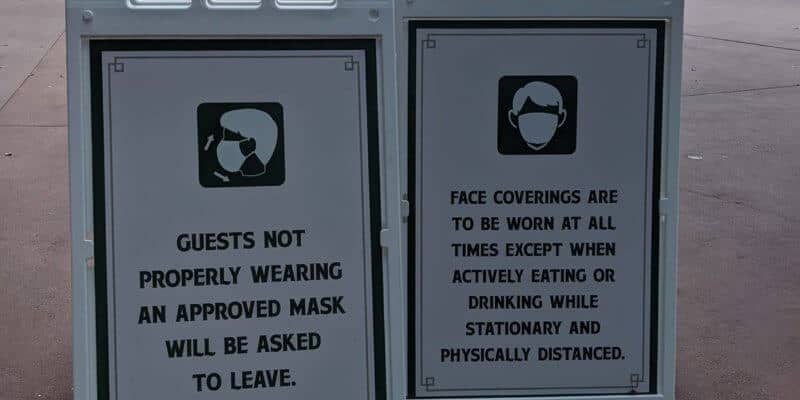 All of the Disney Parks, which have reopened or are getting ready to reopen, have had to make many operational changes due to the current state of the world as we all try to navigate the COVID-19 pandemic.

Now, the President Biden administration is reportedly looking to relax federal public health guidance on wearing masks outdoors — but will Disney follow? Here’s what we know.

To keep both Guests and Cast Members safe, Disney Parks — such as Walt Disney World in Florida which reopened in July 2020, and Disneyland Resort in California which will be reopening on Friday, April 30 — have implemented social distancing, not just throughout the parks but in attraction queues as well. There are also very strong face mask rules in place, as well as a reduced capacity at the theme parks.

All of that being said, in Florida, each of those safety measures has been relaxed in some way since Disney World reopened in July. For example, even though social distancing is still in place in queues, the parks have begun loading every row instead of every other row on certain attractions including Big Thunder Mountain, Slinky Dog Dash, and others.

Additionally, mask wear is still mandatory on Disney World property and while visiting Downtown Disney in Disneyland (and will be required in the theme parks as well once Disneyland Park and Disney California Adventure reopen this week), however, over at Disney World, Guests can now remove their masks for a few seconds when taking outdoor photos that are socially distanced from others. At Disneyland in California, however, masks are still compulsory at all times, even when taking photos.

The limited capacity has also increased since the parks reopened at Disney World in Florida. We do know that America is predicted to reach a much stronger state of normalcy by July, which could mean that capacity could increase once again. However, it is important to keep in mind Disney has not stated if or when they will increase the limited capacity.

Since Disney World is private property, they adhere to their own rules. This means that although the state of Florida has stated they will allow Disney to increase capacity, it is the Resort’s choice on whether or not they will. With that being said, it is now being reported that by CNBC that “the Biden administration is slated to relax federal public health guidance on wearing masks outdoors as soon as this week.”

“What I believe you’re going to be hearing, what the country is going to be hearing soon, is updated guidelines from the CDC. The CDC is a science-based organization. They don’t want to make any guidelines unless they look at the data and the data backs it up. But when you look around at the common sense situation, the risk is really low, especially if you’re vaccinated.”

At the moment, we have not heard what these possible relaxed guidelines will be, but even if they are announced by the CDC, it is important to note until Disney announces anything, the rules listed on the websites for the Disney Parks (Walt Disney World and Disneyland, for example) will remain in place.

That being said, new guidance from the CDC and recommendations from the Biden administration could possibly encourage Disney to continue to relax face mask rules. It seems that the parks are moving toward providing a more normal experience for Guests, and Disney has announced that they would like to phase out masks at the theme parks by 2022.

For now, Guests must continue to wear appropriate masks covering their nose and mouth unless actively eating, drinking, while stationary, or while taking an outdoor photo. Failure to comply will result in Guests being removed from the park. For Disney World’s official rules, visit their website here.

But what about in California?

On the other hand, Disneyland Resort will be opening both Disneyland and Disney California Adventure on April 30 to 25% capacity, but they will have stricter rules than Disney World. For example, masks must currently be worn for photos at Disneyland. We do not know how social distancing will work on attractions, but it would not be surprising to see all attractions socially distanced, as we previously saw at Disney World when the Florida parks first reopened last summer.

From that rule alone, we know that Disney is willing to relax mask wear at one park and not the other, so just because Disneyland is reopening much later than Disney World, after seeing the mask wear rule not be consistent at both Disney World and Disneyland, it seems that Disney may decide to keep face mask rules the same at the Disneyland Resort depending on the guidelines in place in the State of California.

That being said, Governor Newsom issued a press release that aims to have California fully reopened by June 15. The press release noted, “On June 15, California will fully open its economy if two criteria are met: If vaccine supply is sufficient for Californians 16 years and older who wish to be inoculated; and If hospitalization rates are stable and low”.

“With more than 20 million vaccines administered across the state, it is time to turn the page on our tier system and begin looking to fully reopen California’s economy,” said Governor Newsom. “We can now begin planning for our lives post-pandemic. We will need to remain vigilant, and continue the practices that got us here – wearing masks and getting vaccinated – but the light at the end of this tunnel has never been brighter.”

If the goal of California is to reopen within the next two months, it’s possible that we could see some changes at Disneyland in the near future, such as the relaxation of face mask rules as COVID-19 vaccines continue to be distributed at a fast rate.

All of this being said, Disney has not confirmed that face mask requirements at either park will end soon, and the idea that they would change their rules, even if the state and country allow it, is purely speculation at this time.

Find up-to-date information on COVID-19 and face masks on the official website for the Centers For Disease Control and Prevention (CDC).

Would you like to see mask wear relaxed when outside at a Disney Park? What about when you are visiting the parks? Let us know in the comments.