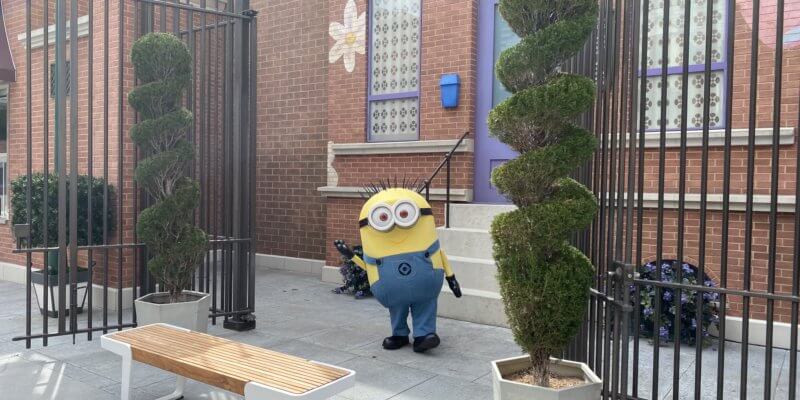 And surprise — Universal has brought out characters for this event, which adds immensely to the ticket value — how fun! We have a reporter on scene at Universal for the opening day, and we snapped some pictures of the characters we saw engaging from a safe distance with Guests.

Taste of Universal is a special ticketed event that offers food, dining, and entertainment on the upper lot of Universal Studios Hollywood. Attractions are not available, which is why it is so great to see Universal bring out characters for Guests!

One of Universal’s most popular characters are, of course, the Minions! Minions are everywhere in Universal Studios Hollywood — In fact, there is even a dedicated land to the Despicable Me and Minions franchises’.

This is a great touch to the event as for today, the opening day of Taste of Universal, the park is not crowded at all and there is plenty of room for fun surprises like this one!

You can see Jerry the Minion greeting Guests next to the Despicable Me attraction inside of Super Silly Funland — How cute! Not only is Jerry out waving to Guests who are attending the Taste of Universal event, but you can actually take a photo with the Minion — From a safe distance, of course!

In the photo, you can see the bench that is in front of the Minion where Guests can sit to have a picture taken with Jerry.

As Universal Studio Hollywood has been closed for a year, getting to see the characters out and enjoying the park with Guests creates a really fun atmosphere!

The Taste of Universal event started today, March 12, and runs through the beginning of April. However, due to the lessening of restrictions in the state of California, Universal Studios Hollywood will be reopening sometime in the near future, though an exact opening date or guidelines have not yet been announced. Because of this, the Taste of Universal event will be even more exclusive as it could be ending soon, so make sure you attend if you are in the L.A area!

You can purchase tickets for the event here.

Will you be attending the Taste of Universal event? Let us know in the comments!

Comments Off on Universal Surprises Visitors With Characters For Event!