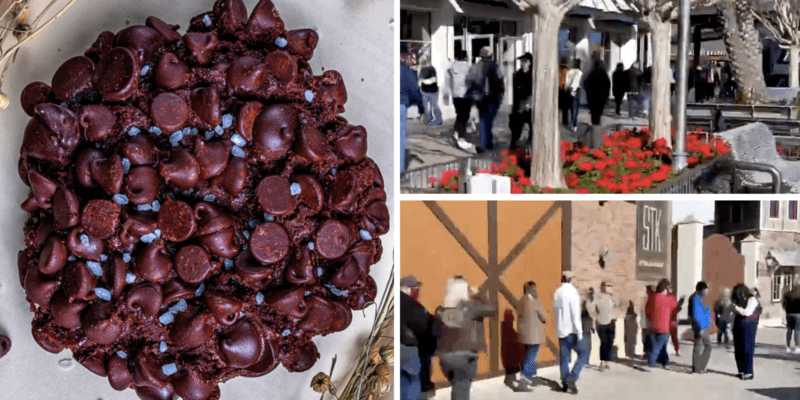 Today — January 16, 2021 — marks the official reopening of the steampunk-themed establishment, and fans couldn’t be more excited about getting their hands on Gideon’s Bakehouse’s famous chocolate chip cookies! In fact, Guests are already piling into Disney Springs and are lined up waiting to try some of the sweet treats from the bakehouse.

The line is already extremely long, leaving some to wonder if they will ever get the chance to try a cookie. Twitter user FARAONE wrote:

Meanwhile, Instagram user Stephanie shared photos of the aforementioned line, which looks to be absolutely massive. She wrote:

Line in front of me everyone loves Gideon bake shop

Related: 7 of Great Things That Debuted at Disney World in 2020

ThrillGeek showcased a wild video of the current line to get into the virtual queue to enter Gideon’s Bakehouse:

Good morning from @DisneySprings! Here’s the current line to get into the virtual queue for Gideon’s Bakehouse. pic.twitter.com/lIsZySUAvs

Mystery A Tweeted a selfie with the caption:

Some online reports indicate that Guests are being told they will have to wait approximately eight hours to return to purchase their cookies and other baked goods from Gideon’s Bakehouse today but Inside the Magic will continue to update you as we get information regarding the official opening of Gideon’s Bakehouse.

The official description of the restaurant reads:

Orlando’s very own Gideon’s Bakehouse is best known for their ingredient rich, from-scratch “almost half pound” cookies that take over 24 hours to create. Prepare to experience flavors ranging from their celebrated Original Chocolate Chip to addicting Pistachio Toffee.

Gideon’s brings an expanded menu of cookie and cake slices to Disney Springs, including a special line of Double Frosted Cakes and its own line of extraordinary iced drinks, including the Original Peanut Butter Iced Coffee.

The ever-popular Coffee Cake Cookie, previously only available one month a year, will be on sale every morning. And each evening, you can indulge in a Hot Cookie Hour to cure your sweet tooth after dinner. Gideon’s is also known for secret Limited Edition first come first serve desserts, offering you fun and unique surprises throughout the year.

Are you planning to visit Gideon’s Bakehouse on its official Grand Opening day today?