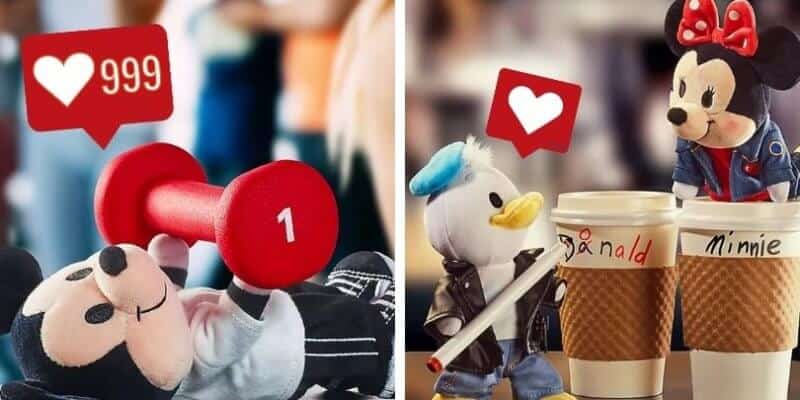 If you ever dreamed of becoming a social media influencer, but never had the courage to, or didn’t think you would make it as one — well, Disney has released a new collection that might just help you soar into Instagram celebrity status.

Disney has just released nuiMOs! If you are like us you may be wondering, what are nuiMOs? They are little plush Disney characters created to be the next social media models, and Disney best friends — small friends with big style. And, as an FYI, these cuties are pronounced, “New-Eee-MOEs.”

Worldwide, the Disney nuiMOs plush characters aren’t exactly new, nuiMOs have been popular for a while in Japan, at Hong Kong Disneyland. But Disney now has decided to bring the Disney Japanese social media sensation to the rest of the world.

However, only Mickey Mouse, Minnie Mouse, Donald Duck, Daisy Duck, Stitch, and Angel are available right now at shopDisney.com and at Disney stores in the United States.

To add to the cuteness of the nuiMos, the collection has several different little outfits that you can purchase to accessorize your new mini Disney friends including hats, pants, jackets, t-shirts, and even Loungefly backpacks. So, you can dress and style your Disney friend.

And your collection of nuiMos clothes and accessories have the possibility of increasing each month. Like several Disney merchandise collections, the Disney nuiMOs outfits will have a new monthly release. For the January 2021 nuiMOs outfit sets, there was the release of two Chinese New Year outfits.

The nuiMOs collection is also very affordable! The simple Disney nuiMOs plush is $17.99 each and the fashionable outfits vary from $12.99 to $19.99. If you own a Disney Park spirit jersey — like for Disneyland or Disney World — you can match with your nuiMOs!

To top it all off, Disney is doing a nuiMOs related Instagram contest where you can win pieces from the upcoming February nuiMOs collection! To participate, you need to take a picture of your nuiMOs and add it to your Instagram. Then, tag @shopDisney and @DisneynuiMOs.

The new Disney nuiMOs can be your plush toy cuteness Disney gateway to becoming an Instagram sensation with your adorable Disney nuiMOs posts! Take pictures with them everywhere you go and get creative!

If you are interested in taking a look at the new nuiMOs Disney collection, you can head to shopDisney.com, at your closest Disney store, and inside any Disney theme park.

What did you think of the new Disney nuiMOs collection? Which Disney miniature plush would you like to get first? Let us know in the comments below.

Comments Off on Disney nuiMOs Are the Newest Disney Social Media Sensation!