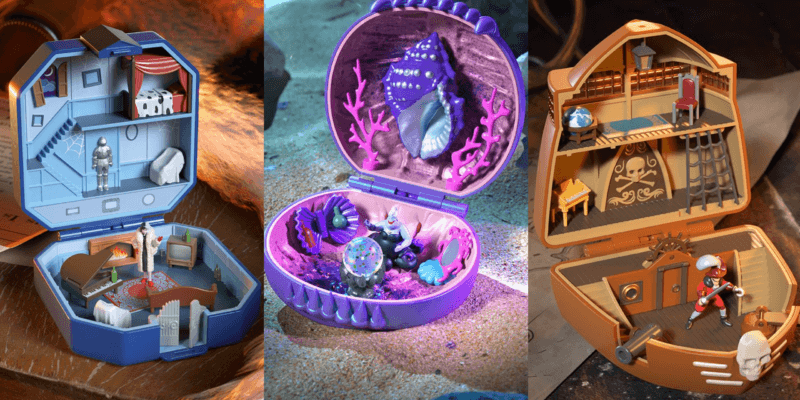 It’s hard to believe that Polly Pocket has been around now for over 30 years. During that time we have seen a lot of sets released but nothing quite like the sets that have been designed by CGI artist Jan Koudela to create Disney Villain Polly Pocket sets.

The awesome team at TheToyZone put together some amazing concepts for what Disney Villain houses might look like in miniature Polly Pocket form. Here’s what the team had to say on the concept:

Our art director Povilas collaborated with Jan on a moodboard of memorable images from each villain’s appearance in the movies we chose. Jan next sketched the toys and then 3D-modelled the final Polly Pockets using Cinema4D. Jan and Povilas were very careful to capture the essence of real Polly Pocket toys rather than forcing the Disney aesthetic into each box. We think they did a cracking job!

Let’s take a look at a couple of our favorites:

This design takes you aboard the Jolly Roger and sees Captain Hook inside his famous ship. We love the detail in this set as it includes a cannon, plank, skull, and even a little globe map table so that Hook can plot where he’s traveling to next.

This set is inspired by one of the original Polly Pocket designs and features Ursula’s undersea lair. We love the various movie props included within the set. They include a crystal ball, vanity mirror, and an enchanted nautilus shell, it looks very similar to the Journey of the Little Mermaid attraction at the Magic Kingdom.

We love this rendition of Hell Hall. It features a piano, television set, bed (with an ominous-looking Dalmation spread, and suit of armor.

If you’re interested in more of these Disney villain creations then go and check out the full piece over on TheToyZone.

If you love Disney villains then be sure to check out some of our merchandise highlights. They include:

Sadly all of these are just artist concepts at the minute but let us know in the comments below which one you would purchase!