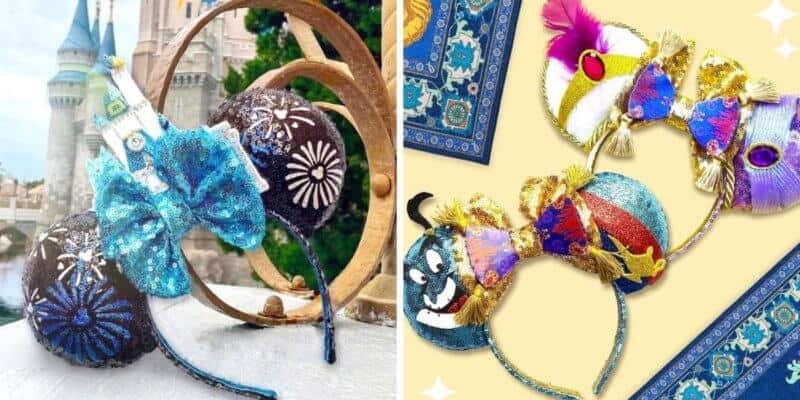 Minnie Mouse ears are a staple for a Disney vacation. Not only do they come in all different designs, including classic, holiday-themed, attraction inspired, different color schemes, and more, but they also make for great photo opportunities and wonderful souvenirs.

However, Disney Parks aren’t the only ones creating and selling unique Minnie Mouse ears. One Disney-inspired shop — MouseketEars Bowtique — has taken Minnie Mouse ears to a whole new level!

Why should I worry or care when it’s CATURDAY? ?? These ears + all of our other designs will be available for our next shop opening on Friday (5/15) at 5pm PT! ???

A post shared by MouseketEars Bowtique (@mouseketearsbowtique) on May 9, 2020 at 12:13pm PDT

MouseketEars Bowtique is a Disney-inspired shop that opened up in June of 2015 and is run by Disney fanatics Sabrina and Savannah.

The two started their shop on Etsy, but within the last year they decided to switch from Etsy to a Shopify website, which turned out to be the right choice, Savannah explained to Inside the Magic.

So where exactly did Savannah and Sabrina come up with the adorable name of MouseketEars Bowtique?

“Naming a business can be difficult and Sabrina and I definitely thought that when we were deciding the name,” Savannah explained to Inside the Magic. “We went through different ideas, but nothing sounded right, until brainstorming and came up with MouseketEars Bowtique. The name just sounded right, it sounded like US, so we stuck with it!”

Make way for Prince Ali (you’re gonna love this guy)!! ?‍♂️?✨ ? QUIZ TIME! ? How many animals total does Prince Ali have? We’ll randomly select a comment that has the correct answer for a 10% off coupon code to use for our next shop opening this Friday at 5pm PT! ?♡

The Variety of Minnie Mouse Ears

MouseketEars Bowtique has a wide collection of ear designs, and while The Mandalorian and Ahsoka Tano inspired ears are the most popular, those aren’t Savannah and Sabrina’s favorites. Savannah told us, “My favorite mouse ears we’ve created in our shop is probably our firework WDW/DLR castle ears or our Hamilton inspired ears. It’s hard to pick!”

“Sabrina’s favorite ear we’ve created is our Pandora and our Jungle Cruise inspired ears!” she continued.

Happy reopening day @waltdisneyworld!! Stay safe everyone and don’t forget to be kind to the cast members!! ? Is anyone in the parks today? What do you think of the castle’s new paint job? ?✨

More About the Shop Owners

So, when Savannah and Sabrina aren’t busy making and designing new ears for their Disney-inspired shop, what do they like to do? Well, even though they are located in Arizona, they recently became annual passholders to Walt Disney World! And even though they aren’t APs at Disneyland, they still visit the theme parks in California quite often!

The duo loves spending time in Animal Kingdom at Disney World and Disneyland park at Disneyland Resort. They just love “being able to experience the amazing attractions, trying all of the different foods, and being able to hear the iconic park music!” Savannah told Inside the Magic. “Overall, we just love feeling the magic of being in the parks, no other place can compare!”

“We would visit every day if we could,” she continued to say, “but our preferred time to visit the parks would have to be during fall/winter because it’s not so hot! But frankly, anytime you’re able to visit the parks, is the best time! “

Thank you, Savannah and Sabrina, for sitting down with Inside the Magic and talking all things Disney, Minnie Mouse Ears, and more!

As we mentioned before, MouseketEars Boutique sells so many different Minnie Mouse ear designs, perfect for everyone’s taste. So if you want to grab a pair of cute Minnie ears for yourself, be sure to take a look at their full shop here.

Which pair of Minnie ears will you be purchasing from MouseketEars Boutique? Let us know in the comments below.

Comments Off on Ears With Character! Shop Unique Minnie Ears for Your Next Vacation