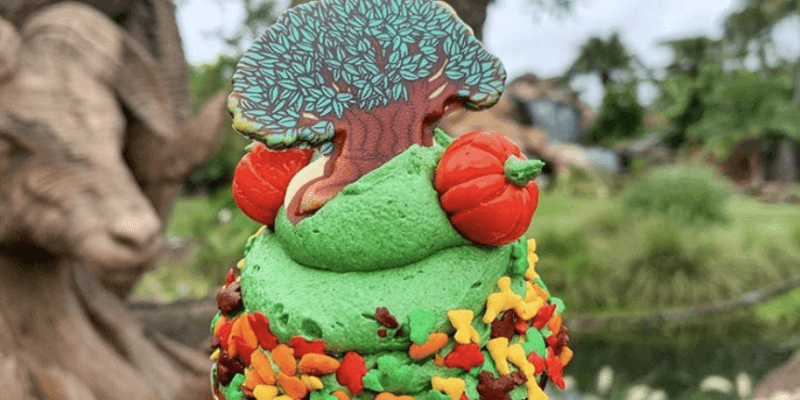 Crawl, prowl, flap, or slither over to Disney’s Animal Kingdom for a new Disney cupcake! Sweet snack foodies love to hunt down specialty cupcakes all over Walt Disney World Resort and this fall, we’ve got an eyeful of sugar. Creature Comforts on Discovery Island holds within it a bakery and a Starbucks, which often sells cupcakes to Disney Guests looking for a sweet ending.

There, you can pick up the new Tree of Life cupcake which holds our iconic Park emblem and the current season in the palm of our hands!

This falling leaf-inspired Disney creation is one that the Pastry chefs went wild with! It is a pumpkin flavored cupcake topped with vanilla buttercream.  A grand Tree of Life-printed white chocolate piece sits on top of the green-tinted buttercream with two fondant pumpkins and leafy sprinkles surrounding the buttercream topping’s base.

The biggest surprise? A Toffee cheesecake center filling. The center creamy core is essential to the sometimes dry cupcakes, but in and of itself, a delicious treat.

Tree of Life Cupcake – Pumpkin Cream-filled cupcake topped with vanilla frosting and a white chocolate tree. – The pumpkin was a pretty predominant flavor, was kinda dry till you hit the middle where the cream is. Overall was good but not memorable. It does make for a great photo tho.

Other specialty cupcakes you’ll want to sink your teeth into include the Villainous Scar Cupcake, which is a delicious red velvet cupcake with toasted marshmallow filling, chocolate marshmallow frosting, chocolate pebbles, white chocolate flames, and an edible icing image of Scar!

You can also snack on the Seasonal Pumpkin Caramel Cupcake featuring a creamy caramel core, surrounded by pumpkin cake. The treat is topped off with a lightly flavored salted caramel buttercream frosting, and a generous sweet caramel sauce drizzle from the pastry experts at Karamell Kuche. The caramel core, combined with the pumpkin cake and salted caramel frosting gives a perfect balance to the pumpkin dessert.

Are you gnashing your teeth for the new Tree of Life Cupcake? Leave us a comment about who you will enjoy this treat with!