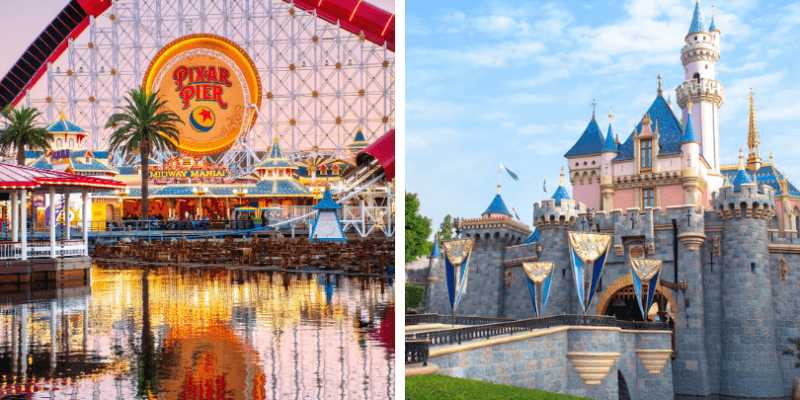 Disneyland Park and Disney California Adventure are unlikely to fully reopen before 2021. But as we watch how Walt Disney World has reopened their four theme parks, we’re left wondering what operations will look like when Disneyland does reopens its gates.

Well, Disneyland has gotten creative with how they can have their gates somewhat ajar for Guests to enjoy again by opening up Buena Vista Street for shopping and dining. It’s brought an increasing amount of crowds in just a short time, but health and safety measures still keep the capacity low. These crowds show how anxious Disney lovers on the West Coast are to get back inside the parks, and we know Disney will do all they can to be making magic for us again.

Well, it’s pretty safe to say that with a low capacity at reopening, park hopping at Disneyland and Disney California Adventure will not be allowed intially. Walt Disney World has announced though that Park Hopping will be available starting January 1, 2021. With modifications to park hopping, Guests who have a Park Pass reservation will need to visit the park that they have a reservation for before being allowed to park hop to another after 2 pm. It will not be necessary to have a second Park Pass in order to park hop, but if a park is at capacity, the Guest will not be able to visit. So, is this how Disneyland will be offering park hopping when capacity can be increased?

How Would This New Park Hopping Procedure Work at Disneyland?

Park Hopping for the sister Disney Parks across the country don’t exactly look the same. With Disneyland having two parks with just an esplanade between the two, and Walt Disney World having four parks that you need to drive to or take park-to-park transportation (using buses, monorails, boats, or the Disney Skyliner), just the time it takes to park hop is different. Walt Disney World in Florida is spread out over such a large property that many of the long distance travelers who visit Disney World will designate a day to visit each of the four parks, but that doesn’t go to say that the Disney vacation Guests and Annual Passholders aren’t ambitious enough to Park Hop in a single day.

With Disneyland Resort being significantly smaller in size, it’s pretty common for Guests to park hop between the two parks several times in one day. Many Annual Passholders will just go for a few hours in a day, maybe for dinner or just a few rides, so if Disneyland brings the same park hopping modifications that Walt Disney World does, it may not work. A solution to this would be for Disney to wait and gauge the crowd capacity for a day, much like they do with monitoring the crowd levels at Buena Vista Street and Downtown Disney. Perhaps they can allow Guests to see on the Disneyland App if it is possible to park hop between the two or make a Park Hopping Park Pass so that there is a reservation for both parks.

But if similar modifications do come to Disneyland for park hopping, how would you plan out your day at the Disneyland Resort? Would you choose to get a Park Pass for Disneyland Park and then try to Park Hop over to Disney California Adventure or vice versa? You would likely have to figure out what attractions, dining, and time of day ambience you like of each of the parks. We know that entertainment will be out of the picture for some time, so we don’t need to think about parades or show like Fantasmic! or World of Color, but what about everything else?

Disneyland Park is typically the park that opens later, so I personally like to start at Disney California Adventure and then work my way over to Disneyland Park, but dinner and drinks are always fun at night at Disney California Adventure because you have Carthay Circle and Lamplight Lounge with the Pixar Pal-A-Round in the background. Though both parks are great during the day, I love the ambience of Disneyland Park after dark because there’s something so magical and nostalgic about Main Street U.S.A., Sleeping Beauty Castle, “it’s a small world,” and the Mad Tea Party all lit up.

So how would you choose to Park Hop at Disneyland with these Walt Disney World Park Hopping modifications? Share with us in the comments below!

Comments Off on How Will Park Hopping Look When Disneyland Reopens?