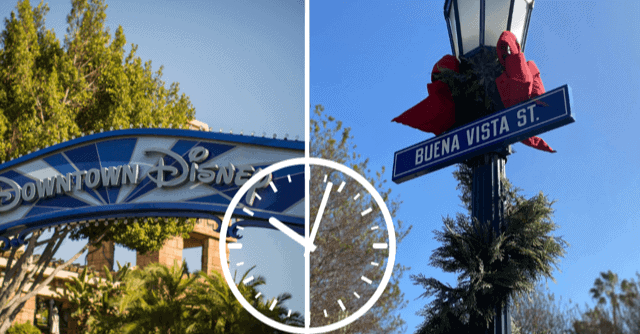 The Disneyland Resort just had a monumental day as it just reopened DCA’s Buena Vista Street since closures began in March. Additionally, Downtown Disney hours have been extended for the week of Thanksgiving, allowing Guests more time to experience Buena Vista Street in Disney California Adventure. However, as Orange County moves back into the Purple Tier, how does the resort plan to keep up with county health and safety protocol?

In a recent press conference, California Governor Gavin Newsom, announced that Orange County along with many other surrounding counties have moved back into the most “restrictive” tier or the Purple Tier. This changed a few things for the Disneyland Resort, which is currently operating their Downtown Disney District and now DCA’s Buena Vista Street. This tier only allows for outdoor dining, so some locations in Downtown Disney had to make those adjustments for capacity.

“The Downtown Disney District and its Operating Participants have made the appropriate adjustments to their retail and dining locations, as aligned with the latest state and county guidelines. For example, all dining is outdoor patio only,” a Disney official shared with Inside the Magic.

Related: Orange County Moves Back to CA’s Most Restrictive Tier

But now, the California governor has issued another county mandate that could affect the resort and its current operating hours.

Newsom recently announced that beginning this Saturday, all counties currently within the Purple Tier will have to abide by a curfew.

As we have learned from the Voice of OC, the official order calls for “non-essential work, movement and gatherings stop between 10 PM and 5 AM in counties in the purple tier. The order will take effect at 10 PM Saturday, November 21 and remain in effect until 5 AM December 21. This is the same as the March Stay at Home Order, but applied only between 10 PM and 5 AM and only in purple tier counties that are seeing the highest rates of positive cases and hospitalizations.”

Newsom had this to say about the curfew:

“The virus is spreading at a pace we haven’t seen since the start of this pandemic and the next several days and weeks will be critical to stop the surge. We are sounding the alarm. It is crucial that we act to decrease transmission and slow hospitalizations before the death count surges. We’ve done it before and we must do it again.”

So, what does this mean for the Disneyland Resort?

Since technically Downtown Disney will be closing at 10 p.m., we suspect that the state-mandated curfew may not be an issue. However, when staying until closing at the Disneyland Resort, Guests are often still accommodated in shops and eateries, and also still making their way to their cars, even after the listed closing time. It’s possible that, now that the 10 p.m. curfew is to be in place in Orange County for the next month, Disney may opt for Downtown Disney (and, therefore, Buena Vista Street, by extension) to close a 9 p.m. nightly instead.

So far, Disney has made adjustments to follow state mandates and health and safety protocol. But will they scale back on their operating hours with this new curfew in place? Only time will tell. We’ll report back if anything changes.

Do you think the Disneyland Resort should respect the curfew and close earlier? Let us know in the comments!