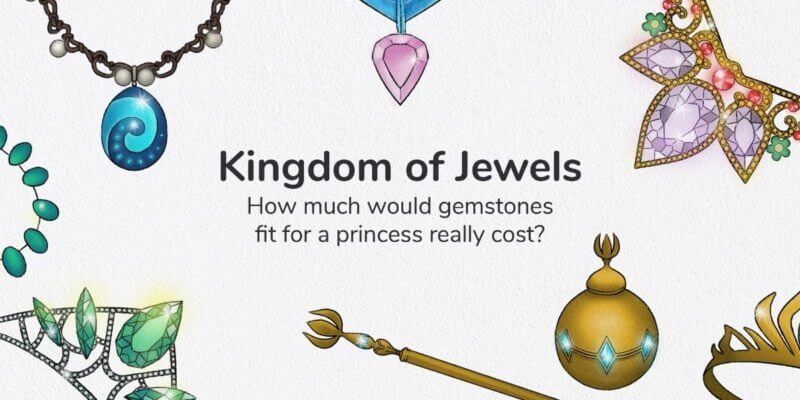 The worlds of fairy tales are full of villains, heroes, princesses, princes, and, of course, beautiful jewelry! The glam and sparkle from those amazing jewelry pieces are breathtaking, and the ultimate goal for any aspiring Disney Princess would probably be to own a tiara or ring fit for royalty. But, have you ever stopped to wonder what those elaborate collection of precious gems and gold are worth?

In collaboration with a jewelry expert, Money.co.uk set to find out how much each Disney princess jewelry set is made of and how much it would cost in the real world.

Here is the breakdown of the top five most expensive sets of Disney Princess jewelry:

When Elsa is crowned as Arendelle’s queen, her coronation set included three pieces made of solid yellow gold and sapphires include a scepter, orb, and tiara.

According to the jewelry expert, Elsa’s orb is the most valuable in the collection because of the four sapphires which are around 10 carats each.

When Anna is crowned Queen of Arendelle in the Disney movie Frozen 2, she shows off a yellow gold tiara fit for a queen. The tiara is a plethora of tourmalines (seven carats in total), citrines (12 carats in total) and diamonds (10 carats total) set against green enamel. Even though Anna’s tiara is not made of the most expensive stones, the intricate design increases its price.

Rapunzel’s tiara in the movie Tangled has some of the biggest stones in all of the Disney Princess jewelry collection. It has three large opalescent moonstones weighing approximately 150 carats. At the base, the Taira has rubies, pearls, emeralds, and diamonds set in yellow gold.

The Princess and the Frog was a ground breaking movie when it came to diversity within the Disney princess, making Tiana the first African American Disney Princess. And her jewelry set is as unique as she is.

Her necklace is most likely to be made of a stone called Apatite, and her tiara has emeralds that resemble leafs and full of diamonds.

Aurora’s necklace is made of plated 22 karat yellow gold. Besides being the last princess that Walt Disney worked on, Aurora was also the first Disney Princess to wear a tiara. Like her necklace, her tiara is made of yellow gold with a series of beautiful aquamarine gemstones.

If you are interested in seeing the analysis of Cinderella, Jasmine, Raya, Mulan, Moana, Ariel and Snow White’s jewelry, you can click here. But, the prince ranking continues as follows:

Which Disney Princess jewelry collection would you like to own? Let us know in the comments below.

Comments Off on How Much Would Disney Princess Jewelry Cost In Real Life?