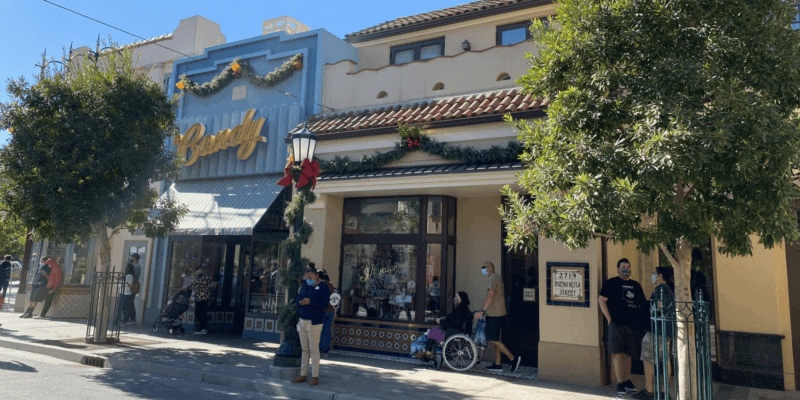 Disneyland Resort fans have been waiting a very long time — 261 days to be exact — for Disneyland Park and Disney California Adventure to reopen following their temporary COVID-19 closure on March 14.

On November 19, Guests were finally able to (technically) re-enter Disney California Adventure Park for the first time since early spring. Buena Vista Street — officially functioning as an extension of the Downtown Disney District — reopened for holiday shopping and dining.

Upon its initial reopening, visitors hoping to get a glimpse of the Disney holiday magic on Buena Vista Street were forced to wait in a line that was — literally, by some accounts — nearly a mile long!

Now that the initial surge is over, however, social media users are reporting very low crowds. As a matter of fact, there has been no wait to enter Buena Vista Street today. Some of this could be due to Carthay Circle Restaurant only accepting reservations at this time — it previously had Disney’s mobile waitlist option available.

Here’s what some Disneyland Resort Guests have seen today.

No wait for #BuenaVistaStreet, so popped in for a bit. Here’s the latest from #AvengersCampus #Disneyland

No wait for #BuenaVistaStreet, so popped in for a bit. Here’s the latest from #AvengersCampus #Disneyland pic.twitter.com/qjzGArskTY

Off the Page & Gone Hollywood look ready to re-open #BuenaVistaStreet

It is important, however, to be aware of the fact that Disney Parks officials have not made any announcements about additional shops and restaurants reopening at Disney California Adventure theme park at this time.

Twitter user Katy shared this photo of the very empty Disneyland esplanade with this somewhat depressing — and obviously sarcastic –observation:

He included several photos of the low crowd levels.

Have you been to Buena Vista Street since its partial reopening began on November 19? Have you had to wait in a virtual queue due to capacity limitations or walked right in?