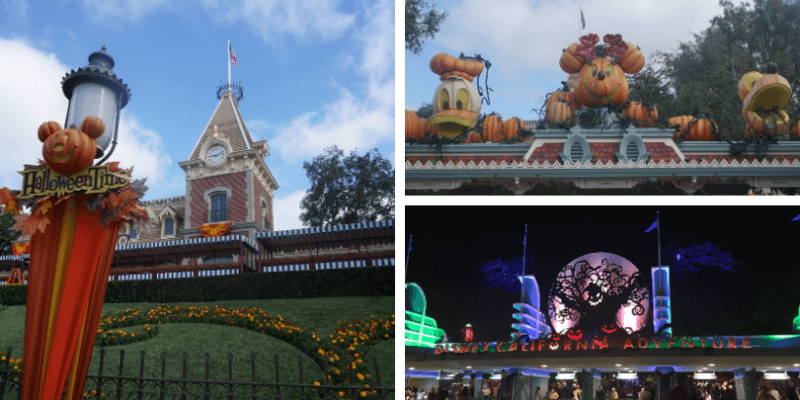 A Disneyland Halloween is a truly special kind of way to celebrate with the villains and the not so spooky characters. Halloween screams of Disney Halloween fill the eerie air, but the sweet taste of candy corn lightens up the mood again. It’s really a shame that this year we won’t be able to spend the spooky holiday inside Disneyland Park and Disney California Adventure. Instead, we thought we’d reminisce on Disneyland Halloweens past to relive the supernatural magic of Disneyland.

We love to see the orange and yellows of the Halloween decor at Disneyland Park because it lights up Main Street U.S.A. with the giant Mickey pumpkin in Town Square and is accompanied by the churro scent which really embodies the cinnamon sugar of the Halloween season. Disneyland Park is definitely the less spooky of the two Disney Parks in California during this time of year, but beware because you’ll still catch a villain or two lurking around the streets.

You definitely find one or two of those spooksters at the one attraction that’s holiday transformation stays up from the fall season through the winter, and that’s Haunted Mansion Holiday. The annual Disneyland Halloween Party is where you’ll find all the Disney villains and other characters dressed in their Halloween costumes, but it has changed throughout the years from Mickey’s Halloween Treat to Mickey’s Trick-or-Treat Party and Mickey’s Halloween Party. And of course, most recently the Halloween party made its way to Disney California Adventure for Oogie Boogie Bash!

The latest Disneyland Halloween special event has been the Oogie Boogie Bash where Guests will go home with bags and bags full of Halloween treats while being watched by the Headless Horseman of Buena Vista Street. One treat that won’t make it home are the Halloween time Churros, and it’s a lot of fun to do a park hopper churro cart crawl to grab your S’Mores Churro, Horchata Churro, Pumpkin Spice Churro, and many more.

Be sure to take a break from all that Halloween food to hop on a ride at Mater’s Graveyard Jamboree. Lastly, the Halloween parade that has survived all the different name changes of the Disneyland Halloween Party over the past few years is the Frightfully Fun Parade where you’ll spot your favorite Disney character dressed in their Halloween costume or a Disney villain who just looks like that all year long.

As we celebrate Halloween this year from the Downtown Disney District, home, or some of us at Inside the Magic look back on all the fun favorite Halloween memories we’ve had in years past at Disneyland.

“I always love seeing how many villains are out and about during Halloween season! This Gaston is one of the best character interactions I’ve ever had. He made me chase him halfway across the park to get a picture. SO in-character.” -Rebekah Winters Barton

“1) In 2016, I dressed up as Colonel Sanders, the mascot of KFC! It was hilarious! Before the Halloween Parade started, my family walked down the Middle of Mainstreet USA towards Sleeping Beauty Castle and people waiting for the parade started cracking up, cheering, and taking pictures of this 15-year-old Colonel Sanders. A few families stopped to take some photos with me; I was super flattered! 2) We waited nearly 2 hours to catch a picture of my 18 family members dressed as ‘Toy Story’ characters in front of Winkey, Blinky Mickey on Main Street in Disneyland. We only have about 2 hours of the party left after taking the pictures.” – Alex Lue

“My favorite Halloween memory at Disneyland Resort was last year at the first ever Oogie Boogie Bash. We had such a blast running around the park, experiencing this magical Halloween party, and seeing so many unique characters we hardly ever get to see on a regular park day. Halloween at the parks is so unique—I look forward to it every year!” – Bailee Abell

“Halloween time at the Disney Parks is always memorable because it’s all about the treats and less about the tricks! From the Halloween merchandise and food to the Disney Characters all dressed up in their own Halloween costumes and Guests dressed up like Disney Characters. Its’s just loads of wholesome not so scary fun with family and friends. Plus everything is so cute!” – Kristin Yep

Share in the comments your favorite memories of Halloween at Disneyland!

When we do get to return back to the Disneyland Resort parks, you may need some expert advice to plan your Disneyland vacation so reach out to Academy Travel!

Comments Off on Favorite Disneyland Memories of Halloweens Past!